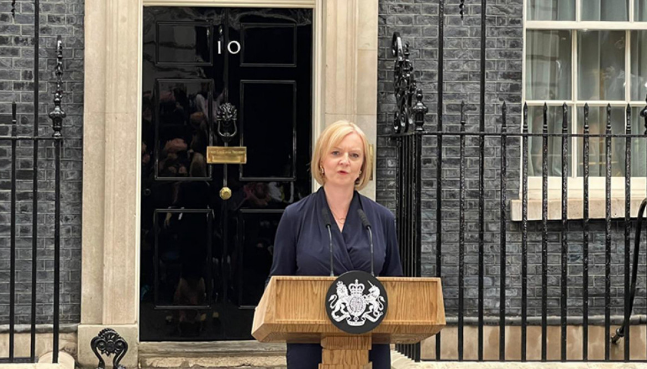 She began by paying tribute to Boris Johnson, saying “history will see him as a hugely consequential prime minister.”

"What makes the United Kingdom great is our fundamental belief in freedom, in enterprise, and in fair play,” she said.

But she acknowledged “severe global headwinds,” including Russia’s war in Ukraine and the aftermath of the pandemic.

Truss said she will “transform Britain into an aspiration nation,” promising higher-paying jobs and safer streets.

“I will take action this day, and action every day, to make it happen,” she said.

Truss then emphasized Britain’s relationship with its global partners. “We can’t have security at home without having security abroad,” she added.

New British Prime Minister Liz Truss said that growing the economy, responding to the energy crisis and improving the National Health Service are her three top priorities in the job.

“I will get Britain working again,” she said, pledging a tax-cutting economic plan that prioritizes “business-led growth.” Truss promised to cut taxes throughout her campaign to become Tory leader, despite her rival and former Chancellor Rishi Sunak warning her plans would fuel inflation.

“We’ll get spades in the ground to make sure people are not facing unaffordable energy bills,” she added.

Truss's second priority is to tackle the energy crisis, promising “action this week to deal with energy bills.” Brits have faced huge spikes in their energy bills during 2022, and the opposition Labour Party has urged the government to freeze rates until next spring, and pay for it with a windfall tax on gas companies.

And the health service, which is struggling through a staffing crisis that has left many people unable to get appointments and treatments, rounds out Truss’s agenda. She promised to ensure that “people can get doctors’ appointment and the NHS service they need.”

“We will put our health service on a firm footing,” Truss said.

After detailing her three top priorities, new British Prime Minister Liz Truss struck an optimistic note for the country, saying, "I am confident that together we can ride out the storm."

She underlined economy, energy and an improved NHS as the three priorities for her government that will ensure opportunity and prosperity for Britons.

We should not be daunted by the challenges we face. As strong as the storm may be, I know that the British people are stronger," Truss said.

"Our country was built by people who get things done," she continued. "We have huge reserves of talent, of energy and determination. I am confident that together, we can ride out the storm. We can rebuild our country and become the modern, brilliant Britain that all you know we can be."