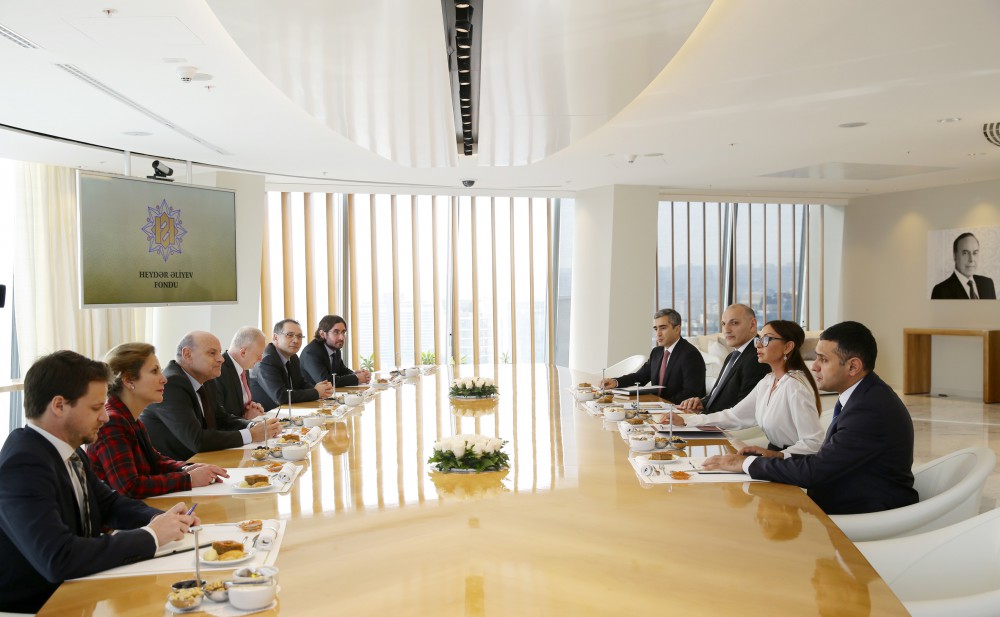 Azerbaijan, first lady, president of the Heydar Aliyev Foundation Mehriban Aliyeva has met with a delegation led by French Minister of State for Development and Francophonie, attached to the Minister of Foreign Affairs and International Development by Jean-Marie Le Guen.

Mehriban Aliyeva expressed confidence that this visit will contribute to strengthening of the Azerbaijani-French ties, AzerTag reports. The first lady praised bilateral relations between Azerbaijan and France. Mehriban Aliyeva said good cooperation was established in the information technologies, space and other fields, adding French companies successfully operate in Azerbaijan. The president of the Heydar Aliyev Foundation also emphasized relations in humanitarian field.

Mehriban Aliyeva described operation of Baku French Lycée and Azerbaijani-French University as one of the greatest achievements in educational field, saying the University carry out the admission for four specialities, and the 5th speciality will be taught at the Facility.

Touching upon the 12 sister city agreements signed between cities and districts of Azerbaijan and France over the last years, Mehriban Aliyeva said this will serve to developing relations in political, economic, and humanitarian fields.

The first lady praised inter-parliamentary relations between the two countries. Head of Azerbaijani-French friendship group, expressed confidence on the possibility of establishment of further close cooperation in this area. Mehriban Aliyeva spoke about the activity of the Association of Friends of Azerbaijan in France, adding this Organization made a significant contribution to bilateral cooperation.

French Minister of State for Development and Francophonie, attached to the Minister of Foreign Affairs and International Development by Jean-Marie Le Guen hailed the activity of the president of the Heydar Aliyev Foundation, adding this activity is the contribution to friendship and cooperation with France.

The Minister of State stressed the special role of the first lady in operation of the Azerbaijani-French University in Baku.