President Aliyev: We have avenged victims of Khojaly on battlefield 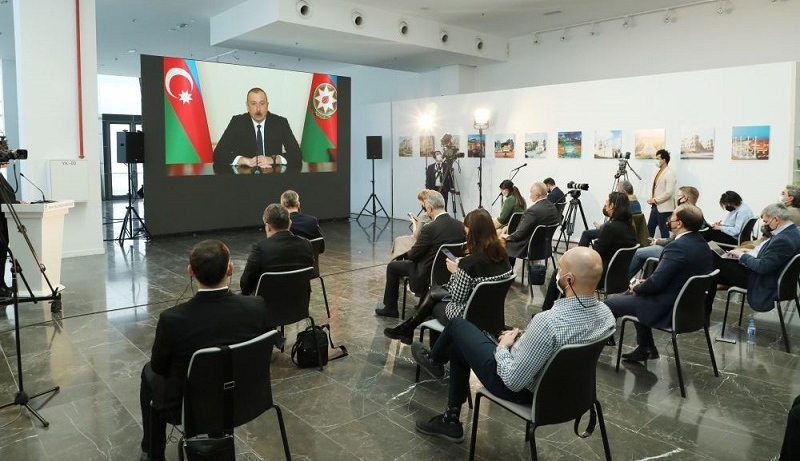 By committing the Khojaly genocide, Armenia essentially wanted to break the will of the Azerbaijani people, President of Azerbaijan Ilham Aliyev said during a press conference held on Feb. 26 for local and foreign media representatives.

“It is no coincidence that the leaders of Armenia, the war criminals, when answering a question about that in an interview with foreign journalists, noted with a sense of pride that Armenia had indeed committed this war crime against the civilian population, so that the Azerbaijani people could see that the Armenian leadership could also raise its hand against the civilian population,” the head of state said.

President Aliyev stressed that the victims of Khojaly have been avenged on the battlefield.

“We, for our part, have avenged the victims of Khojaly on the battlefield. Having defeated the Armenian army in the 44-day second Karabakh war and liberated our historical lands from invaders, we also avenged the victims of Khojaly. Azerbaijan as a strong state will never allow Armenian fascism to raise its head again, although such tendencies are discernible. Azerbaijan through its activities is contributing to the further development of the region and taking tangible steps to fully establish stability in the region,” he added.

The head of state continued: “Numerous events are being held in Azerbaijan these days, and a large group of journalists has come to Azerbaijan from abroad to cover them. I would like to express my gratitude to you for being in Azerbaijan today to cover these events, to cover this act of genocide. I also know that some of you have visited the liberated lands and seen this destruction with your own eyes. You will continue to travel there. Thank you very much again for that.”