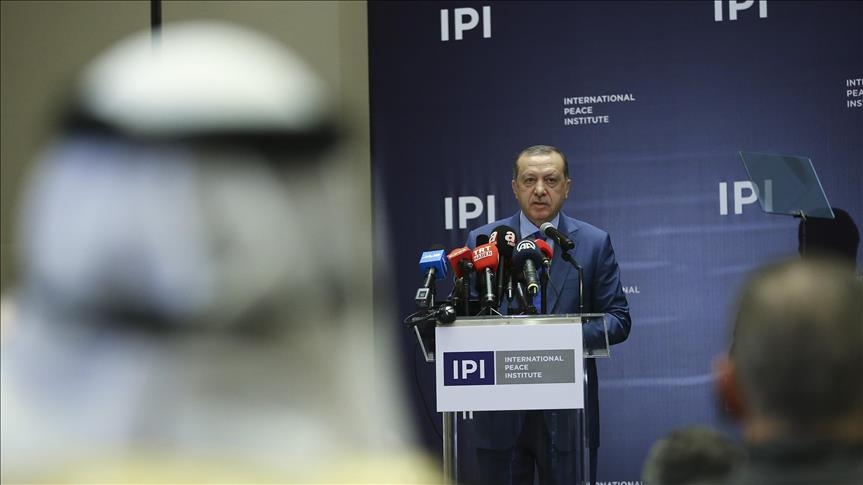 Turkish President Recep Tayyip Erdogan said his tour of the Arabian Gulf this week -- which brought him to Bahrain, Saudi Arabia and Qatar -- had presented a "golden opportunity" for fostering warmer Turkish-Gulf relations, Anadolu reports.

"I deeply believe that Turkey and the Gulf states will together take the necessary measures for ensuring the region’s stability," Erdogan told Al-Arab newspaper.

In response to a question on whether coordination between Turkey, Saudi Arabia and Qatar on the Syria conflict would turn the balance in favor of the Syrian opposition, he said: "Since the conflict began in 2011, we have coordinated closely with the Gulf States with a view to restoring peace and security for the Syrian people and ending the bloodshed there."

"My tour of the region… represents a golden opportunity to establish closer bilateral relations and exchange views on critical regional issues, especially the Syrian file," he added.

Erdogan told the Al-Arabiyya television channel: "[The Syrian city of] Raqqa is the main stronghold of the Daesh terrorist group. We, as members of the [anti-Daesh] coalition, can achieve our objectives by expelling Daesh from the city. I have said this to U.S. President Donald Trump and to many others."

"If we succeed in liberating Raqqa from Daesh," he went on, "we can hand over liberated areas to our Arab brothers, which would contribute to achieving stability there. But we are in dire need of support from the Gulf States, especially Saudi Arabia."

As for Russian-Turkish-Iranian coordination on Syria, Erdogan told Al-Arab newspaper: "Russia has had a military presence in Syria since September 2015, Iran wields enormous influence over the Shia militias allied with the Syrian regime… and Turkey has a long border with Syria and hosts 3 million Syrian refugees."

He added: "These three countries [Russia, Iran and Turkey] play very important roles in the quest for a multilateral solution in Syria. Achieving peace in Syria will be of enormous benefit to the Syrian people; it is also in the interest of the three above-mentioned countries."

"The ceasefire in Aleppo and recent peace talks in [Kazakh capital] Astana were also very important steps towards resolving the Syria crisis. We are finally seeing the light at the end of the tunnel," Erdogan asserted.

"We must not let this light go out; rather, we should encourage it with a view to ending the crisis. Upcoming talks in Geneva, to be held later this month, will be very significant in achieving this goal," he said.

"Along with the U.S. position following the election of Donald Trump, the efforts of regional countries -- such as Saudi Arabia and Qatar -- will effectively contribute to resolving the Syria issue," Erdogan added.

On Qatar-Turkey relations, the Turkish president said that bilateral ties between Ankara and Doha had recently witnessed "rapid development" in all fields. "Our relations are now being conducted at the highest level," he said. "Close coordination between Turkey and Qatar will be very important for the region’s future."

Erdogan went on to voice confidence that the next meeting of the Turkey-Qatar High Strategic Committee -- to be held in Doha later this year -- would "reflect the interests of both countries".

In response to a question on the possible establishment of a Turkish military base in Qatar, Erdogan said: "With a view to maintaining the current level of warm political relations, we must also cooperate closely in the military and defense fields."

Erdogan arrived in Doha on Tuesday for the third leg of a three-nation tour that also included Manama and Riyadh.