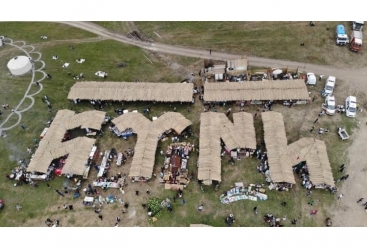 The second National Yaylag (Highland) Festival, aimed at promoting Azerbaijan's national and moral values, preserving the traditions of highland and nomadism, as well as promoting them worldwide, has successfully wrapped up in Hajikand village of Azerbaijan’s Goygol district.

Attended by almost 300 guests from 22 countries, the festival has brought together national and foreign ensembles, as well as the ethnic minority folk groups living in Azerbaijan to perform at the event.

The second National Yaylag Festival is organized by the Foundation for History and Culture "Javad Khan” and “Kap.az” tourism LLC, with the support of Azerbaijan’s Small and Medium Business Development Agency (KOBIA), the Ministry of Youth and Sports, the Ministry of Agriculture, Azerbaijan’s State Tourism Agency, Ganja City Executive Authority, Goygol District Executive Authority, Turkish Cooperation and Coordination Agency (TIKA), and other institutions.

The First edition of the National Yaylag Festival was held form July 26 to 28, 2019 in Duzyurd-Miskinli highland of Azerbaijan’s Gadabay district, with more than 50,000 guests and over 100 participants from 16 countries having attended the event.