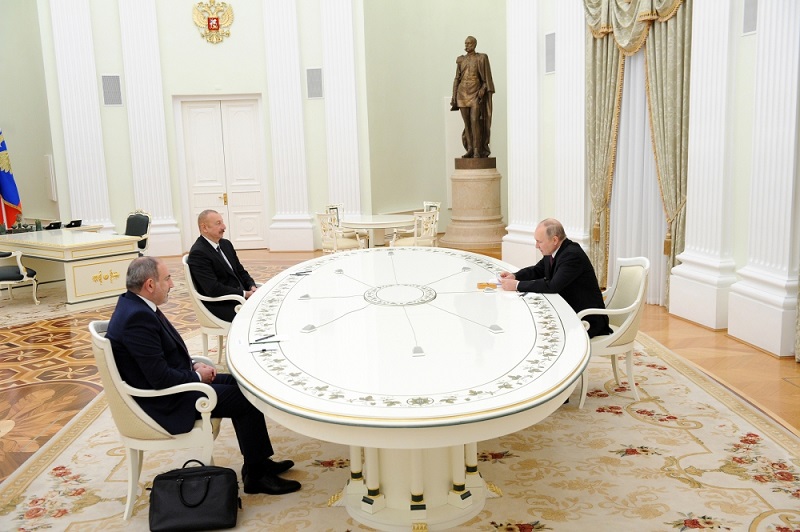 I am very glad to welcome you to Moscow. We are also grateful to you for responding to the proposal to jointly discuss the implementation of our trilateral statement on Nagorno-Karabakh dated 9 November 2020, as well as further steps to overcome existing problems and establish a peaceful life in the region.

Russia values the partnership and good-neighborly relations that bind our countries and peoples together. This is why we followed the outbreak of the armed conflict with anxiety and sincere concern for the fate of people. The large-scale hostilities, unfortunately, led to significant human casualties, exacerbated the already difficult situation in the Transcaucasus and increased the risks of the spread of terrorism.

I would like to thank you, dear colleagues, for your positive response to the active mediation efforts undertaken by the Russian side, which were aimed at helping to stop the bloodshed, stabilize the situation and achieve a sustainable ceasefire. The diplomatic and military agencies of our countries worked hard to solve this difficult task. We were in constant contact and looked for a compromise together.

It was as a result of our common efforts that the intensive telephone conversations, including, as you remember, those at night that a trilateral statement was agreed on 9 November, which we signed together with you. This fundamental document, as you know, is primarily about the complete cessation of hostilities, about the dispatch of Russian peacekeepers to the region and, which is particularly important, about providing the all-round and effective assistance to the civilian population affected by the hostilities in returning to normalcy.

At the same time, I would like to note that in all of its actions Russia has sought to follow the key developments achieved within the OSCE Minsk Group. We continue to regularly coordinate our actions with our Minsk Group co-chair partners.

We can state with satisfaction today that trilateral agreements are being consistently implemented. We are convinced that this creates the necessary prerequisites for a long-term and full-scale settlement of the long-standing conflict on a just basis, in the interests of both the Armenian and Azerbaijani peoples.

A Russian peacekeeping contingent has been deployed at the request of the Armenian and Azerbaijani sides to monitor the observance of the ceasefire on the contact line in Nagorno-Karabakh and along the Lachin corridor. A system has been established to effectively enforce the ceasefire. There are 23 observation posts in the area of responsibility of Russian peacekeepers. Four additional posts are responsible for traffic safety along the corridor. The situation in the region is calm now.

We are doing a lot for the safe return of internally displaced persons and refugees. Since 14 November, over 48,000 people have already returned to Karabakh. The exchange of prisoners and the bodies of the dead was carried out with the mediation of Russia.

The International Center for Humanitarian Response is successfully functioning, within the framework of which specialists from our countries solve pressing issues related to the establishment of a normal life in settlements, the reconstruction of destroyed infrastructure, and the protection of historical, religious and cultural sites. Center staff are involved in the restoration of energy and heat supply.

More than 800 tons of building materials have already been delivered from Russia to the conflict zone, in total more than 1.5 million tons of humanitarian supplies. Medical assistance is provided to the population. More than 479 hectares of the territory has been cleared of mines, 182 kilometers of roads, 710 buildings and structures have been checked. More than 22,000 explosive objects have been discovered and destroyed.

I think that it would be important today to first of all outline further steps in the key areas of settlement outlined in the Joint Statement of 9 November last year. I am referring to issues related to the activities of the Russian peacekeeping contingent, clarification of demarcation lines, solution of humanitarian problems and protection of cultural heritage sites.

The task of unblocking economic, trade and transport links in the region and opening borders deserves special attention. It is assumed that these issues will be dealt with by a special trilateral working group chaired by the vice-prime ministers of Russia, Azerbaijan and Armenia.

Dear colleagues, I would like to hope that our talks today will take place in a businesslike atmosphere and serve to ensure lasting peace, security and progressive socioeconomic development in the region, in which we are all undoubtedly interested.