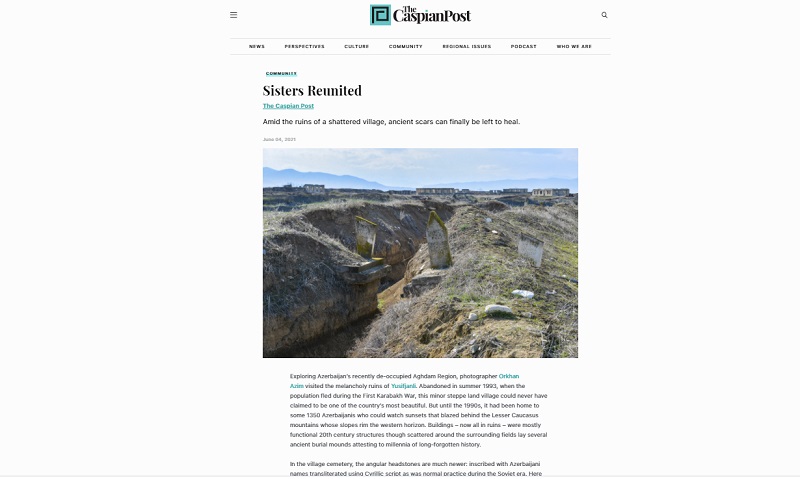 The Caspian Post news portal has published an article condemning the Armenians’ insulting acts on graves in the liberated territories of Azerbaijan.

The article highlights the heartbreaking scene that photographer Orkhan Azim saw in the village of Yusifjanli during his visit to Azerbaijan's Aghdam district liberated from the Armenian occupation.

The article reads: “Exploring Azerbaijan’s recently de-occupied Aghdam Region, photographer Orkhan Azim visited the melancholy ruins of Yusifjanli. Abandoned in summer 1993, when the population fled during the First Karabakh War, this minor steppe land village could never have claimed to be one of the country’s most beautiful. But until the 1990s, it had been home to some 1350 Azerbaijanis who could watch sunsets that blazed behind the Lesser Caucasus mountains whose slopes rim the western horizon. Buildings – now all in ruins – were mostly functional 20th century structures though scattered around the surrounding fields lay several ancient burial mounds attesting to millennia of long-forgotten history.

In the village cemetery, the angular headstones are much newer: inscribed with Azerbaijani names transliterated using Cyrillic script as was normal practice during the Soviet era. Here Orkhan stumbled across this especially poignant scene.

Separated by a narrow gulley lie two such headstones. Azerbaijan now uses its own unique twist on the Latin alphabet in which the name on the grave to the left would be Səringul Mürşüd qızı, i.e. Seringul, daughter of Murshud. The one on the right would be Təyarə Mürşüd qızı, i.e. Teyara, daughter of the same Murshud – a certain Murshud Gahramanov whose memorial also lies nearby. So Seringul and Teyara were sisters.

Originally, they had been buried side by side - as close in death as they’d been in life when they grew up and prospered on the collective farm here. The gulley that divides them came much later: built as a military trench by the occupying Armenians who took the village on 12th April 1994. Well, most of the village.

As it turned out, the Armenian advance went no further, and the edge of Yusifjanli would end up as part of the line of control along which the First Karabakh War ground to its uneasy ‘frozen’ end. For over 25 years, this was a flashpoint on the edge of a dangerous no-mans-land combining minefields, unexploded ordinance and the ever-present danger of crossfire. For those 25 years, the sisters remained on either side.

Then came the Second Karabakh War. In November 2020, by the agreement that ended that 44-day conflict, Azerbaijan regained all the land it had previously lost. Including Yusifjanli. As in the rest of the devastated Aghdam Region, the clearance of mines has begun setting in train the first stage of a massive rebuilding project that will be required for the eventual return of those families who were driven out three decades ago.

Meanwhile, with peace returned, the trench that divided the graveyard will soon be filled in. And as that scar of war disappears, so the Gahramanov sisters, Seringul and Teyara, will be reunited once more.”