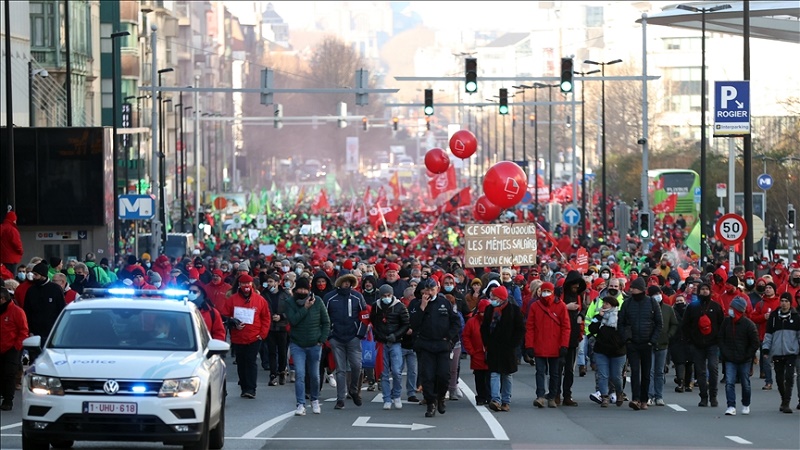 Thousands of workers in Belgium's capital took to the streets on Monday to protest inflation and a law limiting wage raises, Anadolu Agency reports.

Workers from across the country gathered in front of Northern Train Station in Brussels and marched to the Central Station.

The demonstrators, donning green and red hats, masks, and coats, marched on the wide streets gridlocked with pennants of their unions, protesting the 1996 law that prevents workers' wages from increasing by more than a certain percentage.

Since the law, known as the "96 law," sets the maximum rate of increase as 0.4%, employers cannot increase wages above this limit.

The protesters say this rate is insufficient, particularly amid price rises brought on by the coronavirus pandemic.

Thousands of workers marched with banners that read, "Everything is going up, except our wages," "Definitely change the law," and "Union resistance."

Werner van Heetvelde, a trade union member, told Anadolu Agency that one of the biggest problems was the sharp increase in energy prices that has made many commodities unaffordable for many people.

He noted that another reason for the protest was that the government made it impossible for unions to negotiate with employers and that union employees who organized the previous demonstration were punished. "We are here for our right to protest."

Stephanie Bouchat, another demonstrator, said the government's stance has not changed since the last protest.

She emphasized that everything has become more expensive, particularly fuel, but the government does not adjust wages in step with inflation. "Employers agree to give employees a raise. The law, however, prevents this," she argued.

Natural gas and electricity prices have been rising significantly throughout Europe, particularly since the fall. Many consumers faced with high bills through the winter months are particularly distressed.

On Sept. 24, the unions conducted a march with the same demands, drawing thousands to the streets.

Annual inflation in the eurozone reached 4.9% in November, the highest in the last 25 years.