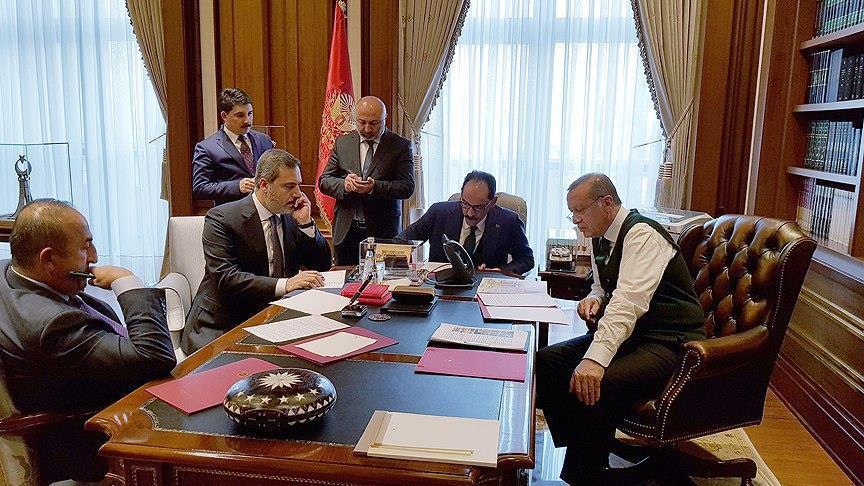 Remarks by Mevlut Cavusoglu came after Trump and Erdogan spoke over the phone on Friday to discuss the recently-concluded Sochi summit, Syria crisis and bilateral ties.

"Mr. Trump [...] clearly stated that weapons will not be given to YPG anymore and said that essentially this nonsense should have been ended before," Cavusoglu told reporters in a joint news conference with Democratic Republic of Congo (DRC) Deputy Prime Minister, and Foreign and Regional Integration Minister Leonard She Okitundu.

Following the phone call, Erdogan tweeted: “I had a fruitful phone conversation with the U.S. President Donald Trump today."

Cavusoglu said one of the topics that negatively affected U.S.-Turkey ties the most were the weapons that Washington supplied to the PKK/PYD terror group.

"Lately, we have seen that some armored vehicles were also given,” he said. “Our president once again conveyed our discomfort to Mr. Trump.”

The PYD and its military YPG wing are Syrian branches of the PKK terrorist network, which has waged war against Turkey for more than 30 years.

Since the PKK launched its terror campaign in Turkey in 1984, tens of thousands of people have been killed.

The U.S. and the coalition have largely ignored the links of the PYD/YPG group with the PKK, which the U.S. and the EU also list as a terrorist group.

Turkey has repeatedly objected to U.S. support for the terrorist PKK/PYD as a “reliable ally” in Syria, support which has included supplying arms and equipment.

Cavusoglu said Erdogan also informed Trump about Turkey's view on the visa issue with the U.S. and called for complete resolution of the issue.

About ties between Turkey and the Democratic Republic of Congo, the foreign minister said the African country is a strategic partner of Turkey. "We want to stress that we see Congo as an important partner.”

Cavusoglu also thanked the DRC government for showing sensitivity on the presence of Fetullah Terrorist Organization (FETO) in their country.

"The necessary work to transfer FETO schools [in the DRC] to Maarif Foundation has started," he said.

Turkey established the Maarif Foundation to take over the administration of overseas schools linked to FETO. It also establishes schools and education centers abroad.

Nineteen African countries have handed over FETO schools to Maarif or closed them on Ankara's request.

Ankara accuses FETO of being behind a long-running campaign to overthrow the state through the infiltration of Turkish institutions, particularly the military, police and judiciary.

FETO also has a considerable international presence, including private educational institutions that serve as a revenue stream for the terrorist group.

Okitundu, for his part, said they want to benefit from Turkey's expertise for development of the DRC.

"There are diverse investment opportunities in Democratic Republic of Congo. This can be utilized for benefit of both Turkey and our country," he said.