President Aliyev: Armenia did not provide Azerbaijan with maps of minefields, this can be considered crime 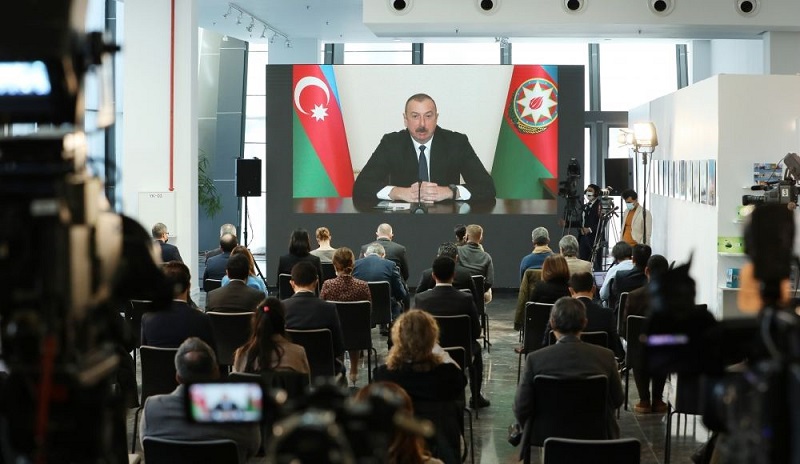 Armenian side did not provide Azerbaijan with maps of minefields, and this, in fact, can also be considered a crime, Azerbaijani President Ilham Aliyev said at a press conference for local and foreign media representatives on Friday.

“We provide a sufficient level of security of the liberated territories, conduct regular raids and monitoring – both using unmanned aerial vehicles and visual monitoring. Therefore, the situation is fully under control,” the head of state said.

“Besides this, of course, the main difficulty is mining. Because the Armenian side did not provide us with maps of minefields. This, in fact, can also be considered a crime because we have had several cases both among military personnel and among civilians when people died after the end of hostilities only because we were not provided with maps of minefields. With the resources we have today, it is impossible to ensure rapid demining. So here too, of course, we see the Armenian side acting insincerely yet again, as it says one thing and does something different,” President Aliyev added.

“We handed over the prisoners of war to them and bodies of the dead to them. After the war, more than a thousand bodies of Armenian servicemen were found in the liberated territories together with representatives of the Armenian side, the peacekeeping mission and our representatives, and they were handed over to the Armenian side. We act in accordance with the norms of morality and universal human behavior. But not to give us maps of minefields means to deliberate doom civilians and military personnel to death and injury. What kind of cooperation can we talk about? In this case, cooperation cannot be one-sided,” he concluded.