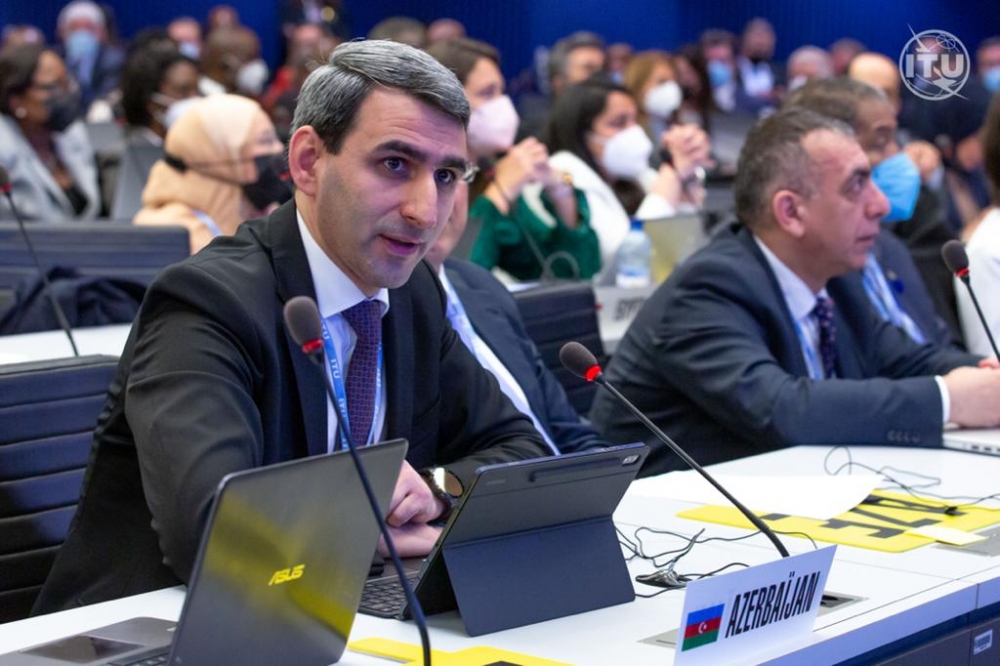 A regular session of the Council of the International Telecommunication Union (ITU) has begun its work in Geneva. Azerbaijan is represented by a delegation led by Deputy Minister of Digital Development and Transport Rovshan Rustamov, News.Az reports.

Reports on the activities of the ITU were heard, Action Plans, financial documents and several other issues for the current and future years were discussed at the event.

On the first day of the event, Deputy Minister Rovshan Rustamov made a presentation on the development of ICT infrastructure in Azerbaijan and the work done on digital transformation.

The deputy minister said that almost 85% of the population of Azerbaijan uses the Internet.

“We continue to invest in the country’s broadband infrastructure and implement national broadband projects with the introduction of GPON and LTE technologies. Our goal is to increase the percentage of fixed broadband Internet subscribers using the FTTH (Fiber to the Home) network and achieve full coverage of broadband Internet with a minimum speed of 25 Mbps by 2024,” Rovshan Rustamov said.

The deputy minister emphasized the importance of expanding public private partnership in this direction in Azerbaijan.

Rovshan Rustamov noted that in Azerbaijan the entire population is covered by a mobile network, mobile broadband Internet is widespread. The number of active mobile broadband subscribers per 100 people is 73.

The deputy minister added that communication is a necessary condition for digital transformation and this is now one of the strategic goals in many countries, including Azerbaijan. According to him, Azerbaijan attaches great importance to the important role of the International Telecommunication Union in this matter. Thus, ITU is an important platform where governments and other stakeholders can come together to collaborate, share best practices and solve complex problems.

Rovshan Rustamov also said that Azerbaijan has nominated its candidacy for the next term on the Council and country’s representative Sahiba Hasanova was nominated to the ITU Radio Regulations Board at the Plenipotentiary Conference to be held in Bucharest in September – October this year.

As part of the event, the Azerbaijani delegation held meetings with Director of ITU Radiocommunication Bureau Mario Maniewicz and Director of ITU Telecommunication Standardization Bureau Chaesub Lee to discuss the possibilities of expanding cooperation with ITU. Also, during bilateral meetings held with the delegations of the USA, Romania, Turkey, Ghana and Uganda, an exchange of views took place on the prospects for partnership within the ITU and participation in the elections to be held within the framework of the next Plenipotentiary Conference of the organization.