Azerbaijani and Armenian FMs discuss organization of meeting between presidents 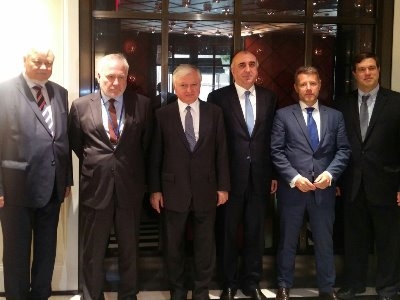 Foreing Ministry of Azerbaijan has issued a press release regarding the meeting of Elmar Mammadyarov with Armenian Foreign Minister Edward Nalbandian.

Foreign Minister Elmar Mammadyarov with participation of the Co-Chairs of the OSCE Minsk Group (Igor Popov of the Russian Federation, Stephane Visconti of France, and Andrew Schofer of the United States of America), the Personal Representative of the OSCE Chairperson-in-Office, Ambassador Andrzej Kasprzyk had a meeting with the Foreign Minister of Armenia Edward Nalbandian on the sidelines of the UN General Assembly 72nd Session in New York.

At the meeting the sides had broad exchange of views on the settlement of Armenia-Azerbaijan Nagorno-Karabakh conflict. In this context, steps to be taken by Armenia, Azerbaijan and Co-Chairs were reviewed.
According to the proposals of Co-Chairs the issues related to the organization of meeting of Presidents of Armenia and Azerbaijan were also discussed.