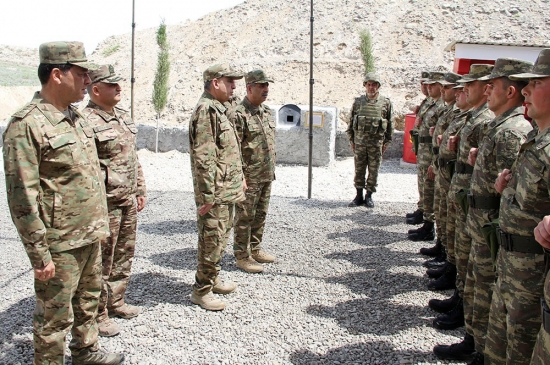 The visit took place under the instructions of President Ilham Aliyev, the Defense Ministry reported Tuesday.

After hearing reports on the operational situation on the line of contact of the troops, the top military officials observed the enemy’s forward positions. Minister Hasanov gave relevant instructions to maintain the constant combat readiness of the units.

Having visited the frontline, Minister Hasanov and Presidential Aide Aliyev held a meeting with military personnel. Speaking about the continuation of activity to fulfill the instructions of the Supreme Commander-in-Chief to increase the combat effectiveness of the Azerbaijan Army and improve the social conditions of servicemen, Aliyev emphasized that these issues are in the focus of constant attention of the country's leadership.

The official then visited tank units, met with tank crews, checked their combat readiness and inquired about their service.

In the end, dinner with the participation of servicemen was organized.