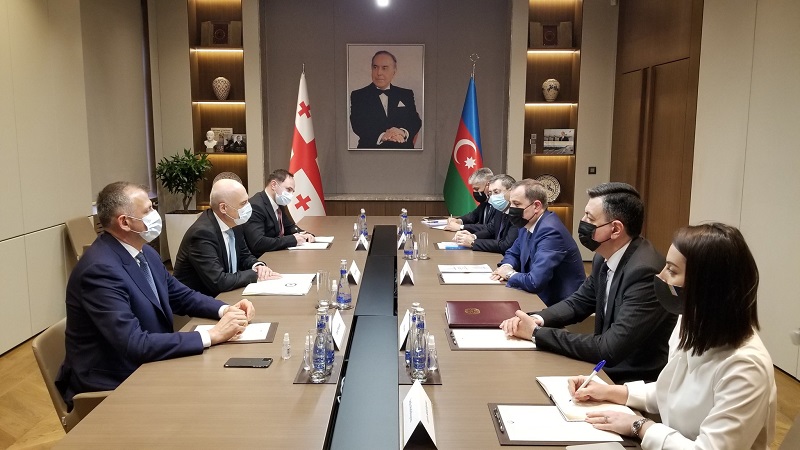 During the meeting, which took place during the visit of Georgian Prime Minister Irakli Garibashvili to our country, the ministers first had discussions in private and then in an expanded format with the participation of delegations.

Welcoming his counterpart, Minister Jeyhun Bayramov noted that the current visit provided a good opportunity to continue the political dialogue between the two countries. The importance of further development of strong partnerships existing between our countries was emphasized.

Minister David Zalkaliani expressed gratitude for the hospitality. Noting that a very productive meeting was held between the Prime Minister of Georgia and the President of the Republic of Azerbaijan, Minister Zalkaliani stressed the importance of further deepening the existing strategic partnership and cooperation between our countries. He strongly stressed Georgia's support for Azerbaijan's sovereignty and territorial integrity, and in turn, noted Azerbaijan's support for Georgia's territorial integrity.

Minister Jeyhun Bayramov informed his colleague about the new realities in the region after the 44-day Patriotic war, the existing opportunities for cooperation, the unique situation for the normalization of relations between the states, as well as issues related to the implementation of the trilateral statement, Armenia's activities and revanchist statements, which hinder the implementation of the trilateral statement, as well as Azerbaijan's position on this issue.

The ministers noted the importance of harmonizing interaction with the existing new realities. The sides also exchanged views on issues on the bilateral agenda, including the development of cooperation in economic, humanitarian, cultural, tourism, and other fields.

The ministers also exchanged views on other issues of mutual interest.