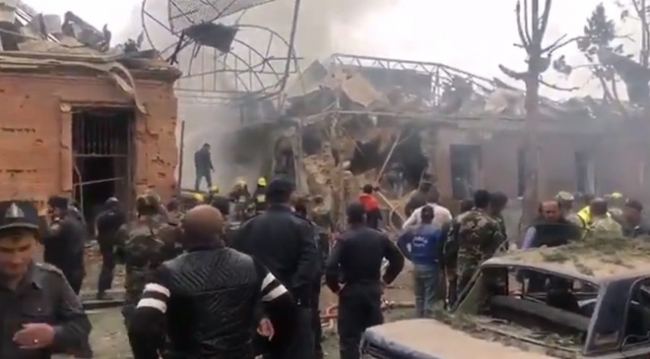 Commissioner for Human Rights (Ombudsman) of Azerbaijan, Sabina Aliyeva, has issued a statement in protest against the killings, injuries of civilians, and the destruction of civilian facilities as a result of regular artillery and missile attacks by the Armenian armed forces of Ganja city and other settlements of Azerbaijan outside the combat zone, Trend reports.

The statement emphasized that the armed forces of Armenia, which has not abandoned its aggressive policy, war crimes, and vandalism, grossly violating the UN Charter, norms, and principles of international law, including the norms of international humanitarian law, as well as the humanitarian ceasefire, declared at 12:00 on October 10, 2020, continues to regularly fire at populated areas from heavy artillery and missiles, willfully aims at the civilian population of Azerbaijan.

“At about 02:00 on Oct. 11, the Armenian armed forces once again fired from the territory of Armenia at an apartment building in the center of Azerbaijan's second-largest city, Ganja, which is 100 kilometers from the war zone. It is a city with an ancient history and many cultural monuments. As a result of the destruction of a building in which there were women, children, and the elderly, 9 people died, 34 people were injured. Numerous civilian infrastructure facilities in the city have suffered colossal damage,” the statement said.

The statement noted that while the norms of international humanitarian law and the Geneva Conventions as a basic principle require a clear distinction between combatants and civilians, military and civilian targets during military operations, the regular artillery and missile fire of Ganja city, which is strategically important for the region, as well as of Mingachevir city and other settlements of Azerbaijan shows that the occupying country doesn’t recognize the requirements of international law, demonstrates indifference to it.

“Influential international organizations and countries of the world must sharply condemn the continuing shelling of the civilian population and cities of Azerbaijan from the occupying country Armenia using special missile systems, which is a war crime and a gross violation of the Geneva Conventions of 1949 and additional protocols to them, especially the ‘Convention on the Protection of Civilians in Time of War’ of August 12, 1949, the Hague Convention ‘On the Protection of Cultural Resources during Armed Conflicts’ of May 14, 1954, and tough measures must be taken against Armenia, following the provisions of international law. We demand from influential international organizations and countries of the world to put an end to the actions of Armenia, which, by violating the norms and principles of international law, continues to commit war crimes that lead to the death of civilians, to suppress the encroachment on the life and health, property of the civilian population of Azerbaijan, and thereby put an end to the accompanying massive violations of human rights and freedoms and war crimes of Armenia, taking decisive measures provided for by international law,” emphasized the statement.

The statement was sent to the UN Secretary-General, the UN Security Council, the UN High Commissioner for Human Rights, the UN High Commissioner for Refugees, the UN Human Rights Council, the UNICEF leadership, the UNESCO, the EU, the Council of Europe, the OSCE, the International Ombudsmen Institute (IOI) and European Ombudsman Institute (EOI), the Asian Ombudsman Association (AOA), the Organization of Islamic Cooperation (OIC), the OIC Ombudsman Association, the OIC Independent Permanent Commission on Human Rights, the European Network of Ombudspersons for Children (ENOC), the International Peace Bureau, as well as to the ombudsmen of various countries, the Azerbaijani embassies in foreign countries and the foreign embassies in Azerbaijan, and the diaspora organizations of Azerbaijan.

On October 11, 2020, at about 2:00 (GMT+4) Armenian armed forces fired missiles at multi-apartment residential buildings in the central part of Ganja, the second largest city of Azerbaijan, located outside the frontline zone.

According to the latest data, 9 civilians, including 4 women, were killed as a result of missiles fired at apartment buildings in the central part of Ganja.

The Armenian Armed Forces, flagrantly violating norms and principles of international law, the Geneva Conventions of 1949 and Additional Protocols to it, as well as the requirements of the humanitarian ceasefire declared on October 10th, continue to deliberately target the civilian population of Azerbaijan, and intensively bombard densely populated settlements.