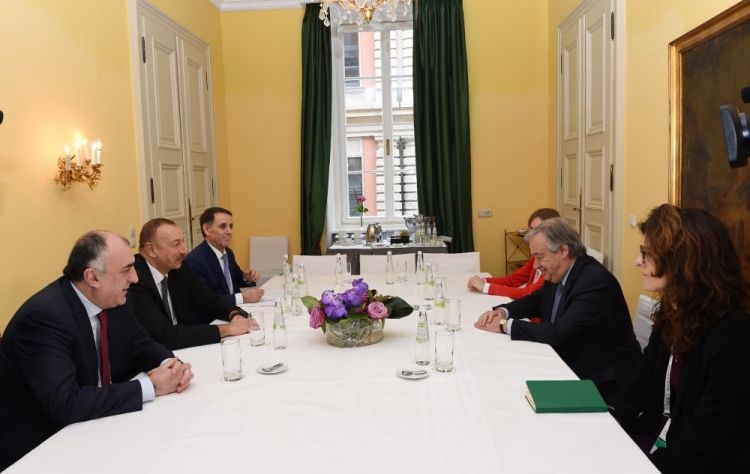 President of the Republic of Azerbaijan Ilham Aliyev has met with the United Nations Secretary-General Antonio Guterres in Munich, APA reports citing to the president’s press service.

President Ilham Aliyev once more congratulated Antonio Guterres on election as the UN Secretary-General. The head of state remembered the meetings with him in Baku with great pleasure.

The Secretary-General spoke about his visits to Azerbaijan as the United Nations High Commissioner for Refugees, meetings with Ilham Aliyev in Baku. He was interested in the current situation and perspectives of negotiations on the Nagorno Karabakh conflict. President Ilham Aliyev informed him about this issue. The head of state regretfully said there is no any progress in the negotiations yet. He noted that Armenia reluctantly participates in the meetings, violates the agreements reached for the settlement of the conflict.

President Ilham Aliyev also noted that Azerbaijani Army responded to provocation committed by Armenian Armed Forces in April 2016 and liberated a part of lands. President Aliyev said the referendum on amendments to the constitution of so-called Nagorno Karabakh to be held on February 20 is illegal and several organizations protested against this issue. He said this shows that Armenian side is not interested in the settlement of the conflict.

Antonio Guterres asked about the conditions for settlement of the Armenia-Azerbaijan, the Nagorno Karabakh conflict. The head of state said the conditions include liberation of 7 regions around Nagorno Karabakh, return of refugees and IDPs to their lands and deployment of peacekeeping force in the region. After this, it is possible to hold referendum about the status of Nagorno Karabakh. President Aliyev stressed importance of interference of the UN and Secretary-General Antonio Guterres in the situation and their support to the process.