Bosphorus closed to ships until further notice due to mine danger, Turkish MoD says 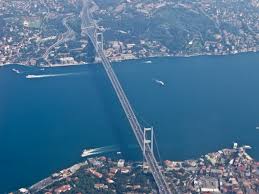 An object believed to be a mine found by fishermen at the entrance to the Bosphorus is now being investigated by authorities, News.az reports citing newspaper Milliyet.

In the meantime, reports suggest that another mine has been spotted near the popular tourist destination of Agva.

Later, the Turkish MoD issued a statement, saying that the object had been neutralized.

"Following the discovery of a mine-like object by a civilian commercial vessel, on the morning of March 26, 2022, in the coastal zone of the Bosphorus, units of the underwater defense (SAS) were promptly sent to the scene. The mine-like object in question was placed under guard by the SAS teams and intervention was carried out to neutralize it", the ministry said in a statement.

At the same time, reports suggested that the strait has been closed to ships until further notice.

The Directorate General of Coastal Safety warned vessels not to approach the area where the suspicious object was discovered.