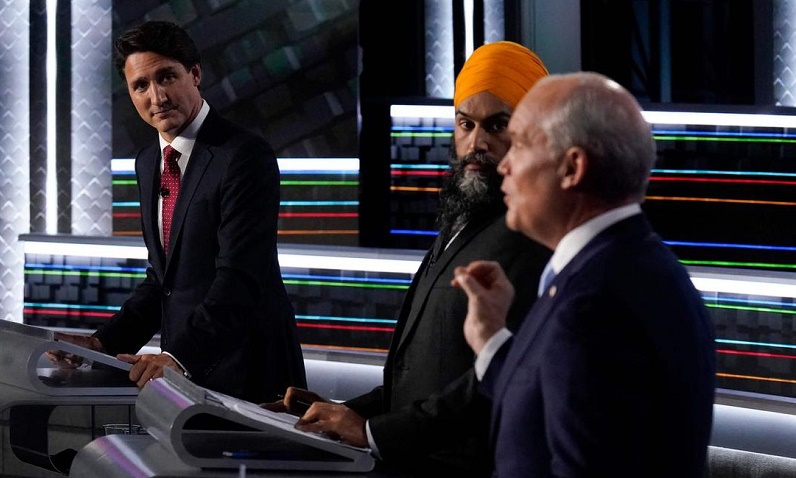 The leaders of Canada's main political parties took part in their final and English-language televised debate on Thursday night, battling over who has the best vision for the country's future, Xinhua reports.

Though none of the leaders emerged unscathed from the raucous back-and-forth of the evening, the voters were still undecided after watching the debate for two hours.

It is likely that the voters would set their sights on the two frontrunners in the race.

In the latest poll, Canadian Prime Minister Justin Trudeau's Liberal Party is slightly behind Erin O'Toole's Conservative Party in a tight race that could result in either party forming a minority government on election day on Sept. 20.

However, the Liberals may have the edge to win more seats of the House of Commons in Canada's two most populous provinces of Ontario and Quebec, positioning Trudeau to secure a third term as prime minister.

In order to ensure he holds that advantage and make gains in western Canada where the Conservatives are in the lead, Trudeau attacked against O'Toole in a far more aggressive manner than what he displayed in the previous debates, both of which were conducted in French, Canada's other official language.

Before the debate, O' Toole called for all Canadians on getting vaccinated.

On climate action, Trudeau's record came under fire by O'Toole, who highlighted that Canada, under a Liberal government for the past six years, has the worst record among Group of Seven countries for reducing greenhouse gas emissions.

Absent in the debate was Maxime Bernier, a former federal Conservative cabinet minister who now leads the rightwing People's Party of Canada (PPC).

For the incumbent prime minister, every moment counts before Canadians cast their ballots, which they will be able to do in advance voting as of Friday.