Congratulatory address of Ilham Aliyev to the people of Azerbaijan 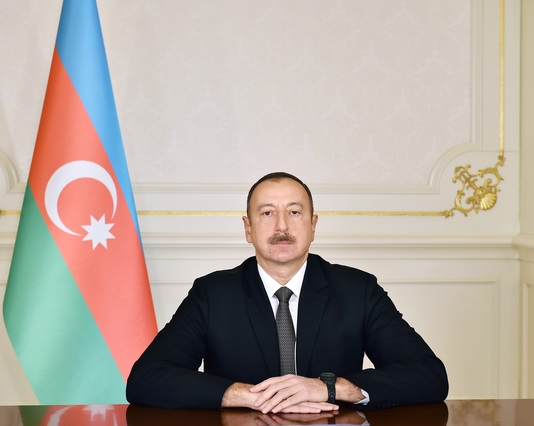 News.Az reprints from APA the congratulatory address of Ilham Aliyev to the people of Azerbaijan on the occasion of the Day of Solidarity of World Azerbaijanis and New Year.

Year 2016 is about to be consigned to history. It has been one of the most challenging years for the national economy. Azerbaijan is an integral part of the global economy. The global economic recession continued in 2016. In addition, in the aftermath of the oil prices plummeting three- to fourfold on global markets, our revenues have dramatically declined. Under such circumstances, we could find a way out of this predicament only by conducting profound reforms, and we achieved that.

Azerbaijan has managed to maintain its economic sustainability and ensured economic stability. The drastic and comprehensive economic reforms carried out this year have opened up great horizons and prospects for our future development. I would also like to mention that despite all the difficulties, our country’s non-oil industry has grown by 5 per cent and agriculture by more than 2 per cent this year. We have managed to safeguard our currency reserves this year. This is also a very important issue because our economic potential and financial resources precondition both economic and political independence.

All social programs were over-fulfilled in 2016. New settlements and townships for the internally displaced persons were built. Even though 2016 was a year of crisis, population incomes have increased by 7 per cent. The average wage has risen by 9 per cent.

In other words, despite all the difficulties, Azerbaijan continued to develop in 2016. Let me reiterate that the decisions made this year, in particular the steps towards economic diversification, will yield fruit. At the same time, we have taken significant steps to diversify our exports, because our currency revenues have dropped in the wake of a reduction in oil revenues, and we can fill this gap by developing non-oil exports.

Our international positions were further reinforced in 2016. The number of our friends has increased, while the forces opposed to us, those conducting occasional campaigns against us are leaving the political firmament. Azerbaijan has managed to make great strides in international organizations. In particular, the Organization of Islamic Cooperation and the Non-Aligned Movement have adopted very important documents in relation to the Armenia-Azerbaijan conflict over Nagorno-Karabakh. The Armenia-Azerbaijan conflict over Nagorno-Karabakh is top of our foreign political agenda. I can say with confidence that our political and diplomatic positions have become even stronger over the past year. No country of the world recognizes and never will recognize the self-styled “Nagorno-Karabakh” formation. The conflict must be resolved on the basis of Azerbaijan’s territorial integrity. There is no other option. The four UN Security Council resolutions must be fulfilled. The presidents of the co-chair countries dealing with this issue, the OSCE and other organizations have repeatedly pointed to the unacceptability of the status-quo.

Year 2016 will also remain in history as one of our glorious victories. For the first time since 1994, Azerbaijan has managed to liberate a portion of its lands from the aggressors. By preventing an Armenian armed provocation in April, our army dealt a devastating blow to the enemy and freed a portion of our occupied lands. Thousands of hectares of lands in Agdara, Fizuli and Jabrayil districts have been freed from the aggressors. The Azerbaijani army is currently in control of tens of thousands of hectares of land.

Year 2016 also brought us great sporting success. Our athletes made a historic achievement in the Rio Olympic Games. By winning 18 medals, Azerbaijan proved yet again that it is a sporting nation and that Azerbaijani athletes are among the best. For the number of medals, Azerbaijan finished in 14th place among 200 countries, seventh in Europe, second among post-Soviet republics and first in the Muslim world. This is a huge sporting achievement for us. At the same time, this victory is a demonstration of the power of our people, our state.

This year we also marked the 25th anniversary of our independence. Our servicemen and sportsmen delighted us with their victories on this occasion.

Important steps were taken to ensure energy security in 2016. The implementation of the Southern Gas Corridor project is well under way. On the initiative of our country, a meeting of the Southern Gas Corridor Advisory Council was held in Baku for the first time. In the final resolution at the end of the meeting, all participating countries and international organizations reaffirmed the leading role of Azerbaijan. The Southern Gas Corridor is a project being implemented on the initiative and with great financial support from Azerbaijan. It is a historic project. After the project has been executed and all work has been finalized, Azerbaijan will receive a huge profit. Therefore, all our plans have been successfully implemented this year. I am sure that this gigantic transnational project will be commissioned in a timely manner. At the same time, the volume of gas to be produced from Azerbaijan’s new gas fields was also determined this year. Thus, the Southern Gas Corridor will be fed not only by the Shah Deniz gas but also by gas from the Absheron field.

I believe that we have also taken historic steps in the area of transport security this year. As you may know, the construction of the East-West transport corridor, which has been under way for many years, is drawing to completion. Azerbaijan has taken very important steps for the commissioning of the North-South transport corridor. It is possible to say that Azerbaijan’s share of the work related to the East-West and North-South transport corridors has been completed. We have completed all work in a short period of time and will do our best in the future to put these important transport arteries into operation as soon as possible.

Year 2016 was declared a Year of Multiculturalism in Azerbaijan. Our country has hosted a number of prestigious international events this year. Azerbaijan has demonstrated to the world again that representatives of different religions, nationalities and ethnic groups can live together in one country, under the same sky and in dignity. Azerbaijan is a country playing an exceptional role in the promotion of the ideas of multiculturalism in the world.

Dear fellow countrymen, it is the Day of Solidarity of World Azerbaijanis today. I salute all Azerbaijanis of the world and send them all my best wishes. They know and should know that a strong and powerful Azerbaijani state stands by them at all times.

Dear brothers and sisters, I wish you a Happy New Near and the Day of Solidarity of World Azerbaijanis. Please accept my wishes for good health and happiness.