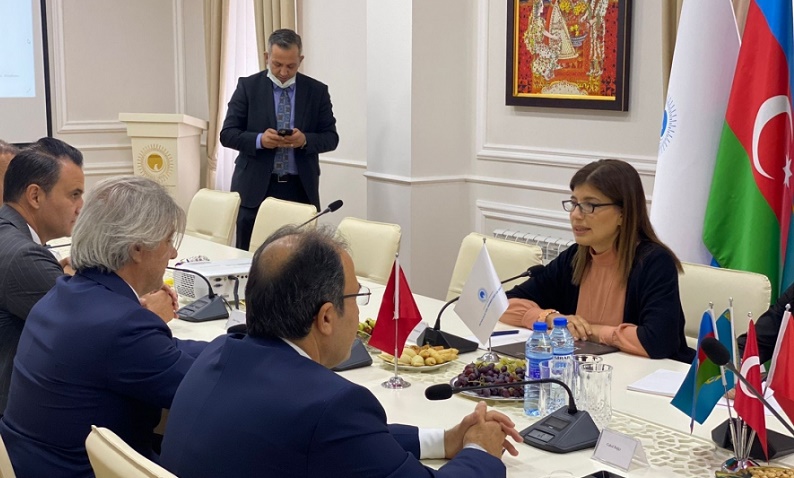 President of the International Turkic Culture and Heritage Foundation Gunay Afandiyeva has met with Deputy Minister of Culture and Tourism of Turkey Ahmet Misbah Demircan, Ambassador Extraordinary and Plenipotentiary of Turkey to Azerbaijan Cahit Bagci and a group of delegation who were visiting the Foundation.

The President of the International Turkic Culture and Heritage Foundation said that she was pleased to see them at the Foundation again. While speaking about the importance of the meetings, Gunay Afandiyeva indicated that strengthening of cooperation between the Foundation and the Ministry of Culture and Tourism of Turkey will make an important contribution to the promotion of cultural values for the Turkic World. Gunay Afandiyeva also emphasized that being one of the founding members of the Foundation, Turkey plays an important role as a partner country that has always supported the activities of the organization.

Deputy Minister of Culture and Tourism Ahmet Misbah Demircan noted that he was pleased to visit the Foundation again during his visit to Baku and spoke about the importance of strong cooperation between Turkey and the organization. While presenting information about the projects implemented by the Turkish Ministry of Culture and Tourism, the Deputy Minister conveyed how special and important is the cooperation with the Foundation that actively works to study and promote the cultural heritage of Turkic speaking nations internationally.

The meeting continued with a discussion of prospects for the promotion of cultural values of Turkey and the entire Turkic World.