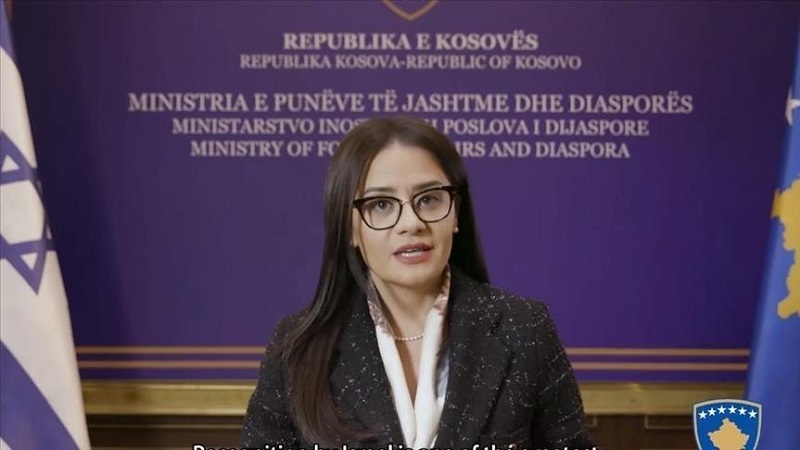 The bilateral diplomatic ties were formalized in a virtual ceremony and the signing was done by Kosovar Foreign Minister Meliza Haradinaj-Stublla and her Israeli counterpart Gabriel Ashkenazi.

The ministers signed the agreements in Pristina and Jerusalem, and the documents will be exchanged later.

Ashkenazi said he approved "Kosovo's official request to open an embassy in Jerusalem".

Meanwhile, Haradinaj-Stublla said: "Today, Israel is becoming the 117th country to recognize the Republic of Kosovo as an independent and sovereign country."

Also, Kosovo recognizes Jerusalem as the capital of Israel.

The ceremony ended with the unveiling of a plaque that will be placed at the entrance of the future embassy of Kosovo in Jerusalem.

Kosovo will be the third country to open an embassy in Jerusalem after the US and Guatemala.

The establishment of relations between Kosovo and Israel was preceded by agreements on the normalization of relations reached in recent months between the Jewish state and four Arab countries, the United Arab Emirates, Bahrain, Sudan, and Morocco.

Kosovo's ambassador to Israel will be Ines Demiri.

Former US President Donald Trump had announced that the leaders of Serbia and Kosovo, who met at the White House in September 2020, reached an agreement to normalize economic ties between the two counties.

The establishment of diplomatic relations and agreement to normalize the economic ties was agreed at a meeting chaired by Former US President Donald Trump at the White House in September 2020.