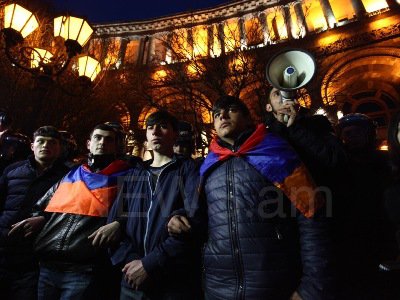 Youths are adamant and don’t fear the persecutions of the police, activist Shahen Harutyunyan stated during the march held in the Republic Square on Monday in m

Today march was relatively more peaceful, although at the junction of Abovyan and Sayat Nova streets scuffle took place between the protestors and the police, news.am reports.

The activists blocked the traffic and staged a sit-in. The police led by Deputy Chief of Yerevan Police Valeri Osipyan removed the activists from the part of the street meant for driving by force. Nobody was detained: the police took the activists in arms and removed them several meters away in order to open the traffic.

Following this, the march went on without serious incidents. The protestors stopped outside the Government building in the Republic Square, chanting their urges and demands.

“We are stabbed in the back,” Shahen Harutyunyan said, referring to the public committee dealing with Artur Sargsyan’s funeral. In his words, they were told only at the last moment about the authorities’ reluctance to bury Sargsyan in Yerablur military cemetery.

Afterwards the march participants returned to the Liberty Square.

No march from the Liberty Square will be held on Tuesday. Instead, a candlelight vigil and march will take place from Sports and Concert Complex to the restaurant complex near Shahumyan cemetery, where the memorial service for Artur Sargsyan will be served.