Neglecting the Voice of Azerbaijan in the Armenia-Azerbaijan Conflict (ANALYSIS) 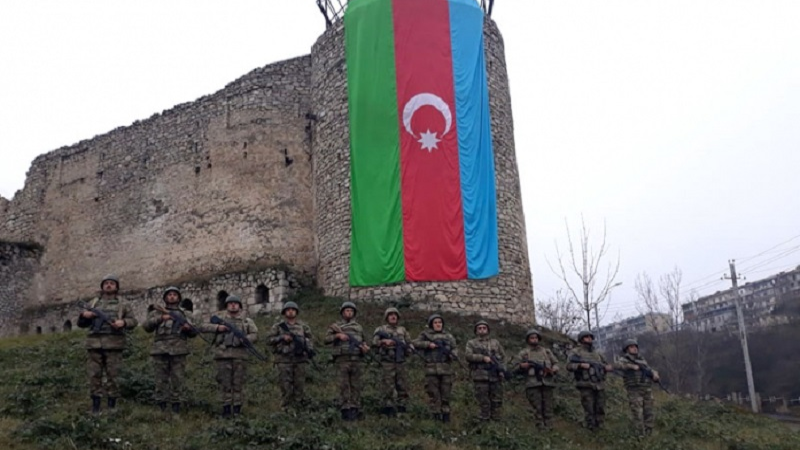 The Greater Middle East, an online analytical resource, has published an article titled “Neglecting the Voice of Azerbaijan in the Armenia-Azerbaijan Conflict.

Throughout the Second Karabakh War (September 27 to November 9, 2020), a disconcerting pattern was established amongst certain institutions, media outlets and individual journalists, expressing a one-sided view of the war and the history of the Karabakh region of Azerbaijan. The media coverage from individuals and organizations, the majority of which claim to stand impartial and objective about the Armenia-Azerbaijan conflict, was intentionally distorted, twisted and manipulated with regard to legal elements and historical facts. Moreover, the same group of individuals and organizations’ goal was the exclusion and marginalization of the Azerbaijani side, which, in turn, creates more obstacles towards reaching peace within the region.

Throughout 44 days of war and after the trilaterally declaration signed by Azerbaijan, Armenia and Russia on November 9, 2020, platforms of certain academic institutions have not been accessible for both parties, thus, leading to a continued one-sided approach to the events. It goes without saying that restricting an exchange of perspectives, especially in such a complex situation, questions the integrity and objectivity of an institution and ultimately restricts the possibility of conflict resolution.

On October 31, 2020, University of California, Los Angeles (UCLA) held an all-Armenian one-day conference titled “Nagorno Karabakh/Artsakh and the Palimpsests of Conflict, Violence, and Memory”, which expectedly carried out a pro-Armenian one-sided narration of the past and current events. In another instance, The Armenian Center at Columbia University held a “Nagorno-Karabakh/Artsakh in the Media: Perspectives from Around the World” discussion on November 5, with 5 Armenian panelists and 0 Azerbaijani presenters. The Human Rights Institute at Columbia Law School has conducted a “Crisis in the Caucasus: Human Rights Violations in [so-called] Artsakh” talk. Moreover, the Program on Peacebuilding and Rights (PBHR) at Columbia University’s Institute for the Study of Human Rights (ISHR) announced the launch of a research project “Human Rights and Foreign Terrorist Activities in [so-called] Artsakh (Nagorno-Karabakh)” on November 12, containing unfounded allegations about Turkish military and mercenaries, deployment of Islamist terrorists and more on the side of Azerbaijan. An urgent appeal from scholars at academic institutions, published by Columbia University, asked for the involvement of the US “as an imperative step towards resolving the crisis in the [so-called] Republic of Artsakh”.

On November 5, the Department of Critical Theory & Social Justice at Occidental College in Los Angeles held an “expert” panel titled “The Armenia-Azerbaijan War & the Crisis in Artsakh”, with 2/2 Armenian panelists. An online panel titled “On Ceasefires: International (In)action in the Nagorno-Karabakh War” hosted by Zoravik (an Armenian activist collective) also held a discussion on October 26, analyzing the ceasefire process without including one of the parties of the said ceasefire.

Unfortunately, the one-sided approach to events in the Karabakh region is not only limited to events held by academic institutions. There have been instances of journalists and reporters who, despite claiming to have an objective approach towards the Armenia-Azerbaijan conflict, have failed to cover the situation in its entirety, only shedding light on one side of the conflict. Inability to stick to impartiality, objectivity and accuracy all break the ethical codes of journalism and put the professionalism of said reporters into question.

A Canadian would-be journalist and analyst, Neil Hauer, has also been actively covering the events of the Second Karabakh War from the Armenian perspective. In his reporting during the war, Hauer has demonstrated numerous one-sided approaches to the events. Before arriving in the Karabakh region to conduct first-hand reports, Hauer was already expressing disdain about BBC’s reporting from Ganja city not understanding the difference between the shelling within and outside the Karabakh region. Moreover, while being outside the region himself, Neil Hauer’s reporting relied on sources like “WarGonzo” on telegram, a channel that is accepted as a biased and unreliable source misleading the Armenian population about the situation in the region throughout the entire war. While expressing criticism about “BBC’s so-said one-sided reporting of the events” and the alleged lack of attention given to shelling within the Karabakh region, Neil Hauer himself, while talking to BBC at a later date, extensively covered the events in Khankendi, refusing to put one sentence about the attacks on cities like Ganja, Barda or Terter. In another instance, when asked to back his claims with evidence, Neil Hauer stated that “The source is conversations with various well-informed people in Stepanakert [Khankendi]”. Lacking nuance or a clear understanding of the conflict like, for instance, referring to all territories previously occupied by Armenia (including the seven adjacent regions) as “Artsakh”, it is clear that Neil Hauer is a war-profiteering individual using his Patreon-backed reporting to manipulate nationalist sentiments and exploiting ethnic hatred to elicit financial contributions. 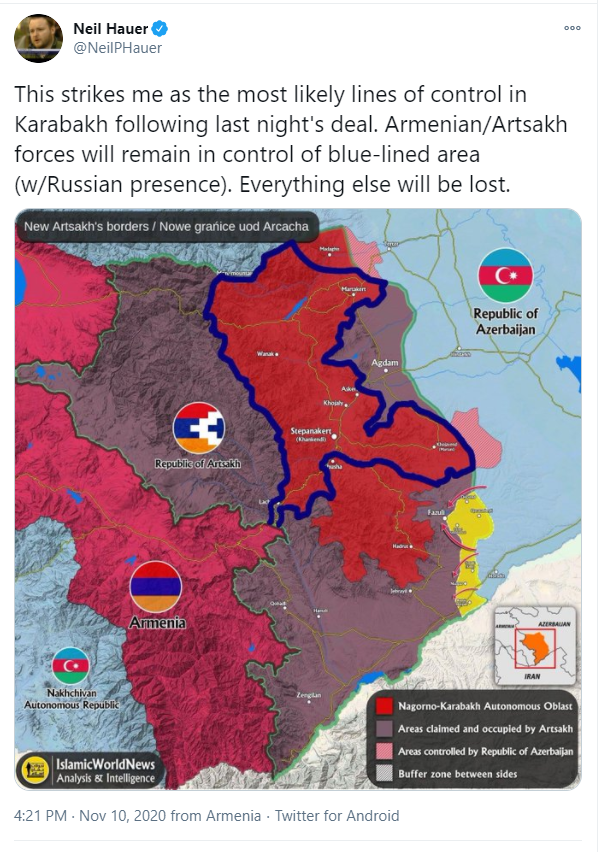 Moreover, Neil Hauer in his arguments with opponents uses coarse language and insults. This should alarm international media outlets like BBC, Al Jazeera and others which give him a platform occasionally to conduct ant-Azerbaijan propaganda campaign. 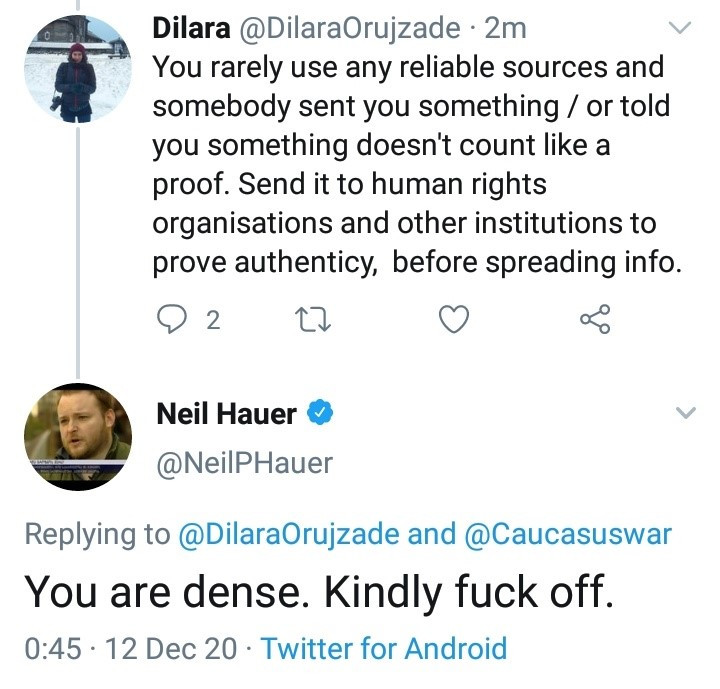 Another would-be journalist, Lindsey Snell, who was previously stationed in the Middle East and suspected in the connection with PKK and other affiliate terrorist organizations. Detained in 2016 for illegally crossing Syrian-Turkish border, Lindsey Snell used every opportunity, including the Armenia-Azerbaijan conflict to revenge Turkey for her detention. She openly admitted in one of her tweets that Turkey should have never arrested me. She reported one-sidedly about the conflict and even objected to findings by the Human Right Watch about war crimes committed during the conflict. She also retweeted some conspiracy ideas of Amnesty International being bribed by Azerbaijan.

Lindsey Snell used coarse language and insults as well in her social accounts.

A resident scholar at the American Enterprise Institute (AEI), Michael Rubin has been actively publishing anti-Azerbaijani op-eds in various media outlets, especially in the National Interest and Washington Examiner. In November 2020 alone, Rubin has published 10 op-eds in the journal, openly carrying out one-sided, uninformed pieces spreading misleading anti-Azerbaijani narratives. The op-eds are filled with wrong information: for example, one mentions the widespread false historical assumption that Stalin “transferred” the region of Nagorno-Karabakh to Azerbaijan Moreover, multiple pieces have relied on the baseless and unconfirmed allegations about Azerbaijan’s military counter-operation, which was conducted on its internationally recognized territory being held under Armenian occupation for twenty seven years. In another piece, Rubin voices and extremist opinion that Azerbaijan is “intend[ing] to complete the genocide the Ottomans began just over a century ago”, while advancing Islamophobic undertone about jihadist war against Christians. Rubin’s policy advice is just as uninformed and carry a lack of expertise: in one piece, he urges the US to go against the norms of international law and “open a US Consulate in Stepanakert [Khankendi]” [16], and in another, he urges Israel to cut ties with Azerbaijan, referring to them as “the victims of one Holocaust not only turning a blind eye toward but also selling weapons to the potential perpetrators of another”. Overall, Rubin relies on various factors (e.g., the factor of democracy, religion) that did not play a vital role in the origin or continuation of the conflict while completely ignoring the realities of international law, history, or diplomacy.

A former United States Ambassador to Armenia, John Marshall Evans, has also participated in the information war, spreading anti-Azerbaijani sentiment and supporting Armenian governmental position, even the extreme claims like Azerbaijan’s wish to commit genocide in the region. Ambassador Evans downplayed the first attack on Ganja and later ignored the following three attacks on the city and other regions of Azerbaijan. Throughout the war, John Evans contributed to the Armenian state-run propaganda, interacting with the Twitter accounts of Armenian and so-called Nagorno-Karabakh Republic’s state-officials, only delivering a one-sided narrative of the events. “Incinerating Karabakh’s forests is a disastrous move,” stated Evans regarding the alleged news about Azerbaijan setting the forest on fire, but held back his thoughts when Armenians were openly setting fire to Kalbajar, an instance carrying proof and being covered by the international media. 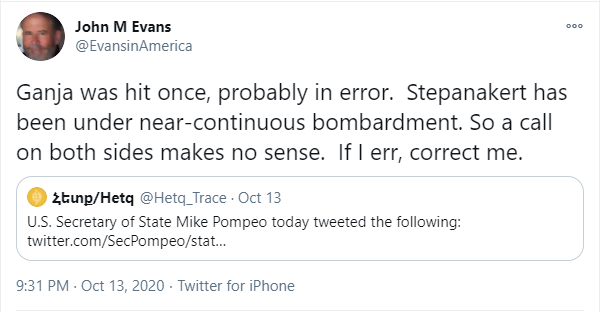 There are clear instances of organizations and individuals approaching the Second Karabakh War and its aftermath through a certain prism of coverage, where the position of the Azerbaijani side is neglected. These are only few samples of larger anti-Azerbaijani campaign in the Western academia and media.

Presenting inaccurate narratives in the past only aggravated the deadlock and did not lead to the peaceful resolution. One must be clear that those who could not put aside their sympathies and biases while informing policy makers and public, which in the end do not help policy makers to produce adequate policies, should not have a moral right to claim himself/herself being impartial. Most of them have been also indifferent to the plight and right of one million IDPs to return their lands from where they forcefully expelled and cleansed for the last 27 years. Blurred lines between the official Armenian-state propaganda and coverage of mentioned international organizations and journalists, who choose not to include Azerbaijani voices in their analysis, be it for lack of knowledge or a biased approach coming from financial interests have a potential to strongly undermine the future of the peace-making process. Putting emotions, sympathies or financial interests above professionalism should never be an option, especially within such a sensitive subject. Instead, all international and non-international entities and individuals choosing to cover the events of the Karabakh region should be neutral facilitators encouraging peacebuilding, reconciliation and promotion of international legal norms.