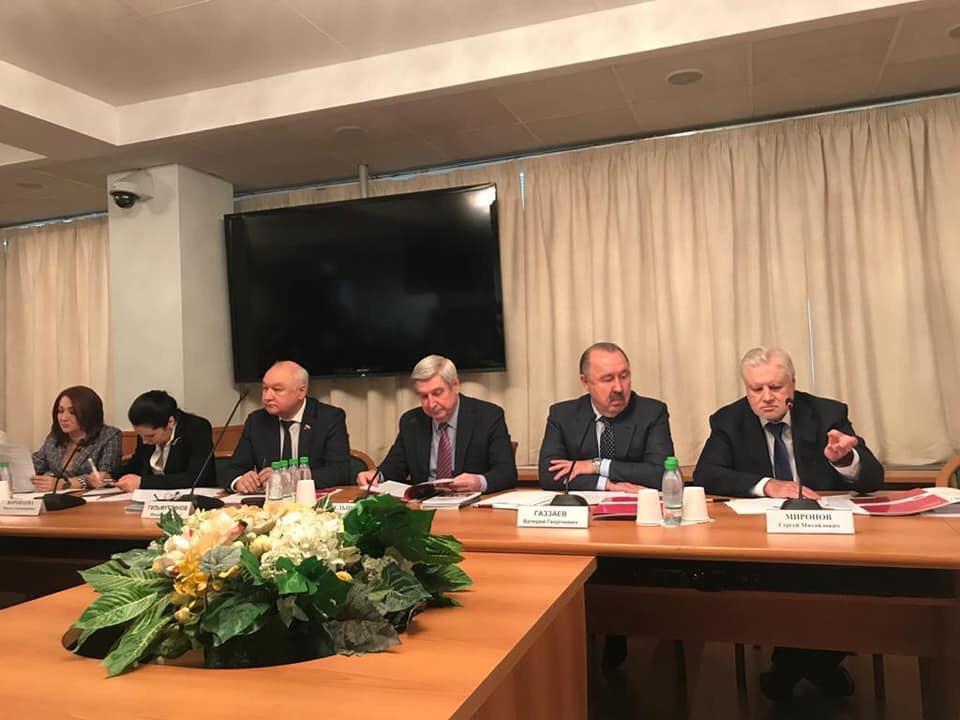 Recently, the State Duma hosted a round table entitled “The historical memory of the Great Patriotic War among the peoples of Russia. Communication of generati

But the event was overshadowed by a scandal with representatives of the Armenian diaspora.

The meeting was attended by leaders and deputies of the State Duma, officials of the Federal Agency for Nationalities, members of the Youth Parliament at the State Duma, as well as experts and representatives of public organizations implementing projects in the field of interethnic relations and civil-patriotic education of the younger generation.

The main goal of the round table, dedicated to the 75th anniversary of Victory in the Great Patriotic War, was to share experience and develop promising tasks in the field of youth policy aimed at preserving the historical memory of the feat of multinational Russia’s people during the Great Patriotic War. In this regard, the glorification of Nazis and accomplices of Nazism by revisionist circles in the post-Soviet space and in Eastern Europe was discussed.

The Russian publicist, historian and TV presenter Dionis Kaptar, speaking at the event, expressed concern over the heroization of Nazi criminals and their accomplices in neighboring countries, especially in Poland and Ukraine, and called for a proactive stance and preventive measures. In particular, he rightly proposed actively reminding the nationalist circles of these countries that a revision of the results of World War II is fraught with re-partition of the existing borders of Poland and Ukraine.

In the same context, the Russian historian spoke about the problem of the state support for the cult of Nazi accomplice Garegin Nzhdeh in Armenia - monuments are being erected to him, his ideas are being promoted. Referring to official documents, in particular, the Russian Ministry of Foreign Affairs report "On the situation with the glorification of Nazism, the spread of neo-Nazism and other practices that contribute to the escalation of modern forms of racism, racial discrimination, xenophobia and related intolerance," Dionis Kaptar cited the specific facts of cooperation with the Nazis from the biography of Nzhdeh.

The Russian historian emphasized the fallacy of comparing Nzhdeh’s heroism to his contribution "to the struggle for the creation of the Armenian state" by the Armenian side. According to the scientist, this is an attempt to veil the process of the heroization of aiding Nazis, and the same is right for the political elites of Armenia, Ukraine, and Poland.

Representatives of the Armenian diaspora present at the round table tried to scandalize the scientist’s speech. The first vice-president of the Union of Armenians in Russia Lusik Ghukasyan attacked Dionysus Kaptar with an incoherent angry tirade in defense of Nzhdeh and called into question the competence of the speaker. Her attack was stopped only when a moderator intervened, but then another vice president of the organization, Levon Mukanyan, interfered trying to insult Dionysus Kaptar.

Dionysus Kaptar explained how he sees opposition to the glorification attempts of  Nazis and their accomplices. “Speaking at a round table in the Duma, I proposed offensive actions in the media sphere and in diplomacy. For example, Moscow could remind official Warsaw that it was Poland, like Nazi Germany, that participated in the partition of Czechoslovakia. And to all those who praise collaborators, we could say that by erecting such monuments, they voluntarily or involuntarily solidify with the losers, "he stressed.

“In no case should we allow our victory to be stolen, thereby insulting the memory of the victors of Nazi Germany and its allies in World War II. And we must not forget that it was we, all the peoples of the Soviet Union, who made the decisive contribution to the victory, " the scientist summed up.