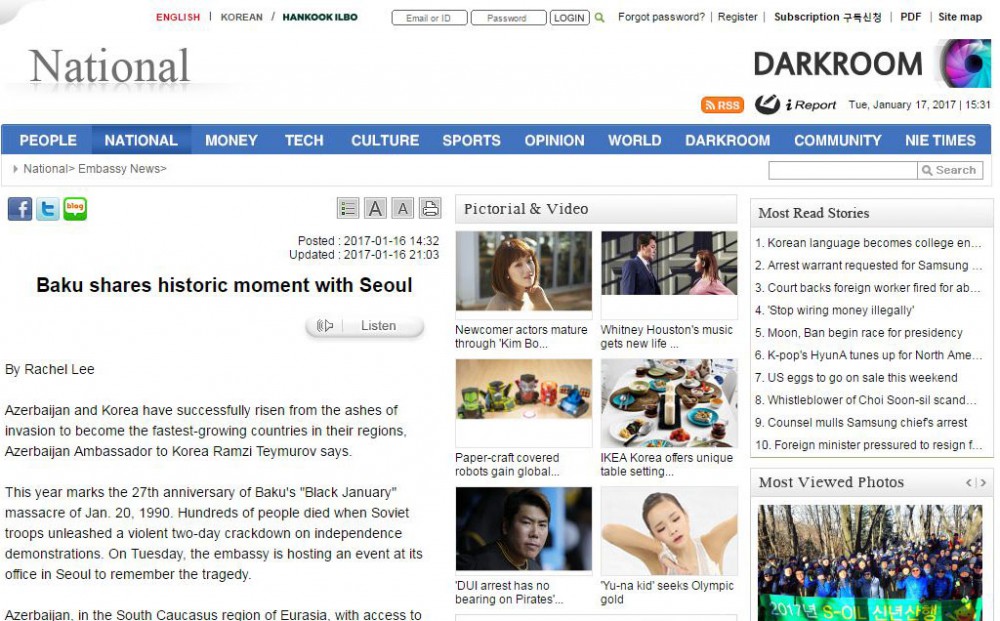 The article says: “Azerbaijan and Korea have successfully risen from the ashes of invasion to become the fastest-growing countries in their regions, Azerbaijan Ambassador to Korea Ramzi Teymurov says, AzerTag reports.

This year marks the 27th anniversary of Baku’s “Black January” massacre of Jan. 20, 1990. Hundreds of people died when Soviet troops unleashed a violent two-day crackdown on independence demonstrations. On Tuesday, the embassy is hosting an event at its office in Seoul to remember the tragedy.

Azerbaijan, in the South Caucasus region of Eurasia, with access to the Caspian Sea, is well known for its oil and natural gas resources, but few Koreans are aware of the country’s other achievements and challenges, Teymurov told The Korea Times.

“Therefore, this is a good opportunity to share the historical background and the sacrifices for the establishment of state independence of Azerbaijan with Korean people.”

The diplomat said the two nations have similar historical backgrounds _ invasions and wars, but “fortunately both could preserve their tangible and intangible cultural heritage.”

During the “Black January” massacre, hundreds of Azerbaijani civilians were killed or injured by Soviet troops, on a direct order from the USSR, which was trying to maintain control of Azerbaijan.

During the night of Jan. 19-20, about 26,000 Soviet troops entered the capital Baku and committed atrocities against the Azerbaijani people who were struggling for freedom and sovereignty. Some 133 civilians lost their lives and 700 were wounded. The Soviet army also attacked the state TV building to prevent news reaching the international community.

The massacre evoked a deep sense of anger and indignation across the world. With the collapse of the Soviet Union in 1991, Azerbaijan regained its independence and became a sovereign state.

The country has marked the anniversary of the Jan. 20 tragedy every year. Thousands of people, including the President and members of Cabinet and Parliament and highly ranked government officials, visit the Alley of Martyrs to commemorate the heroism of Azerbaijan’s people who perished for the sake of freedom and independence.

“We hope this kind of tragedy never happens again with Azerbaijan or any other country of the world,” the ambassador said.

This year also marks the 25th anniversary of diplomatic relations between Azerbaijan and Korea. Teymurov said the embassy is planning cultural and educational events and political and diplomatic functions to celebrate.

This year also marks the 25th anniversary of the Khojaly Genocide of Feb. 26, 1992. “The embassy will do its best to get more Koreans informed about this historical shame,” Teymurov said.

Ethnic Azerbaijanis of Khojaly town, in the Daghlyq Garabagh (Nagorno-Karabakh) region, faced the armed forces of Armenia and the Motorized-Infantry Battalion No.366 of the former Soviet Union, which led to the killing of 613 civilians. Additionally, 1,275 people were taken hostage, 150 went missing and 487 people were disabled, 76 of whom were teenagers.”