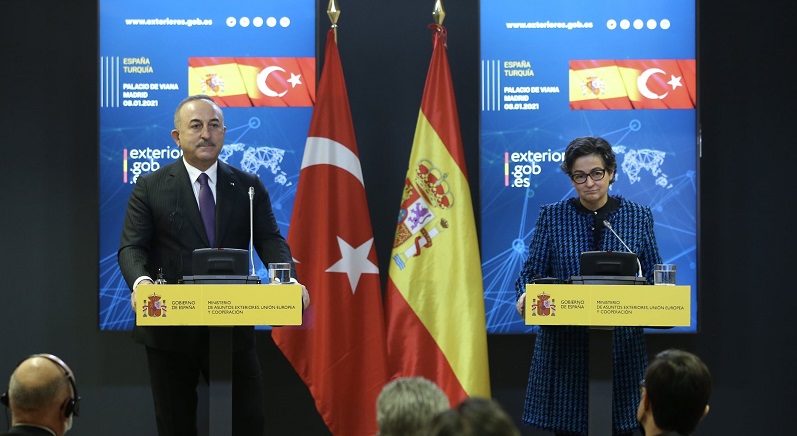 Turkey is working to turn the page in its relations with the European Union, the country's foreign minister said Friday.

"In 2020, because of some of the problems that we experienced with some member countries, there have been occasional tensions in our relations with the EU, which is not a situation that we wish," Mevlüt Çavuşoğlu said in a press conference with his Spanish counterpart, Arancha Gonzalez Laya, in the Spanish capital Madrid.

"But, with the approach of Spain and some other countries, rather than tension, the dialogue has been opted for, and the most recent summit prepared the groundwork for this," he added.

The top diplomat will also visit Brussels to hold talks with the EU's foreign policy chief Josep Borrell on Jan. 21.

Çavuşoğlu told reporters that there had been opportunities to initiate dialogue between Turkey and neighboring Greece.

"We are trying to use those opportunities, as Turkey, without any preconditions. We're always in favor of dialogue, and that's the only way we can decrease tensions and solve problems," he underlined.

Çavuşoğlu also said Turkey and the EU should work together to face the challenges created by the coronavirus pandemic.

"Turkey is a part of Europe, and for the resolution of the problems that Europe is facing, Turkey is ready to work together, also, to use the richness, and the opportunities that our region offers together."

"We are also ready for the resolution of issues of, for instance, migration and other issues with fair responsibilities and the sharing of the burden," he added.

For her part, Laya called for a positive agenda for the relations between the EU and Turkey.

"What we mean by positive agenda is to carry out dialogue-based negotiations with the existing directions, to remove the provocations and tension and to make these steps concrete with the decisions to be taken," she said.

"It is also important to update the customs union agreement between Turkey and the EU. At the same time, both parties should work together on the issue of visa liberalization. Also, our negotiations continue to put irregular immigration on a legal basis," she added.

Laya also said that issues such as Turkey's relations with Greece and France, as well as the Cyprus issue, had been discussed during their meeting with Çavuşoğlu, adding that Spain supports political solutions.

"Turkey is not any neighbor to us. It is a country that has a special relationship with the EU, has access to foreign markets, is already a candidate for full membership to the EU, and is in a different position."

She said that an upcoming intergovernmental business forum in Turkey slated for the second half of 2021 will serve to improve bilateral relations, especially in the areas of health and energy.