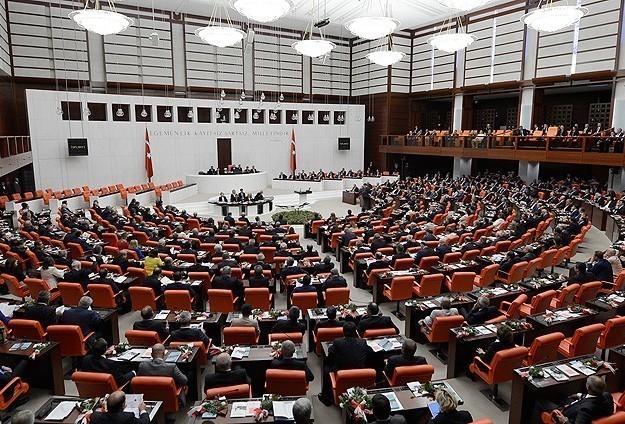 According to the adopted article, the Turkish Grand National Assembly may propose by absolute majority an investigation into the alleged crime of the President. The article was endorsed by 343 MPs, while 137 rejected it.

The lawmakers would discuss this proposal within one month and may decide to launch an inquiry by 330 MPs --three-fifths of the assembly-- in a secret ballot.

An inquiry would be conducted by a commission of 15 MPs, consisting of members of the political parties in the assembly.

The commission would submit a report stating the outcome of the inquiry to the presidency of the assembly within two months. If the inquiry can not be completed within this period, a new and definite period of one month is given to the commission, the Article 9 read.

Turkish Parliament may take the decision of sending the President to the Supreme Criminal Tribunal by 367 MPs --two-thirds of the assembly-- in a secret ballot.

The duty of the President would end if he or she is condemned for a crime that prevents him or her from being elected.

The Article 9 also adds that the President can not take an election decision during his or her inquiry process.

Friday marks the fifth day since the debate on the constitutional reforms began in the parliament. Nine more amendments proposed by the AK Party will be voted in parliament.

The parliamentary process will likely be followed by a referendum in which the option of replacing Turkey’s parliamentary system with a presidential model will be put to the electorate.

President Recep Tayyip Erdogan and his supporters have argued that Turkey needs a strong presidency to avoid weak governance and allow the country to successfully tackle a number of challenges, including terror attacks from Daesh, the PKK and the Fetullah Terrorist Organization (FETO).

Opponents claim it will weaken democratic checks and lead to increased authoritarianism.

To reach a referendum, the proposed changes must first be passed by 330 deputies. If it gets the support of 367 lawmakers it could pass into law without a referendum, although the AK Party said it would hold a popular vote regardless.

A simple majority must agree to the changes in a referendum.

The AK Party has 316 seats and Erdogan hopes the support of the opposition Nationalist Movement Party (MHP), which has 39 seats and last month agreed to back the package, will be enough to secure a referendum.

Other parties -- the Republican People's Party (CHP), with 133 seats, and the Peoples’ Democratic Party (HDP), with 59 deputies -- remain opposed to a presidential system. Two independent deputies are split over support for the amendments.

Among the changes are plans for an elected president to form a government independently of parliament and for the role of prime minister -- typically the person leading the largest parliamentary party -- to be abandoned.

Parliamentary and presidential elections would be held on the same day every five years, instead of the current four for the parliamentary vote.

The president would be limited to two terms in office but would not be required to leave his or her political party.

When elected to the presidency in Aug. 2014, Erdogan had to resign as AK Party leader due to the supposedly apolitical nature of the post.