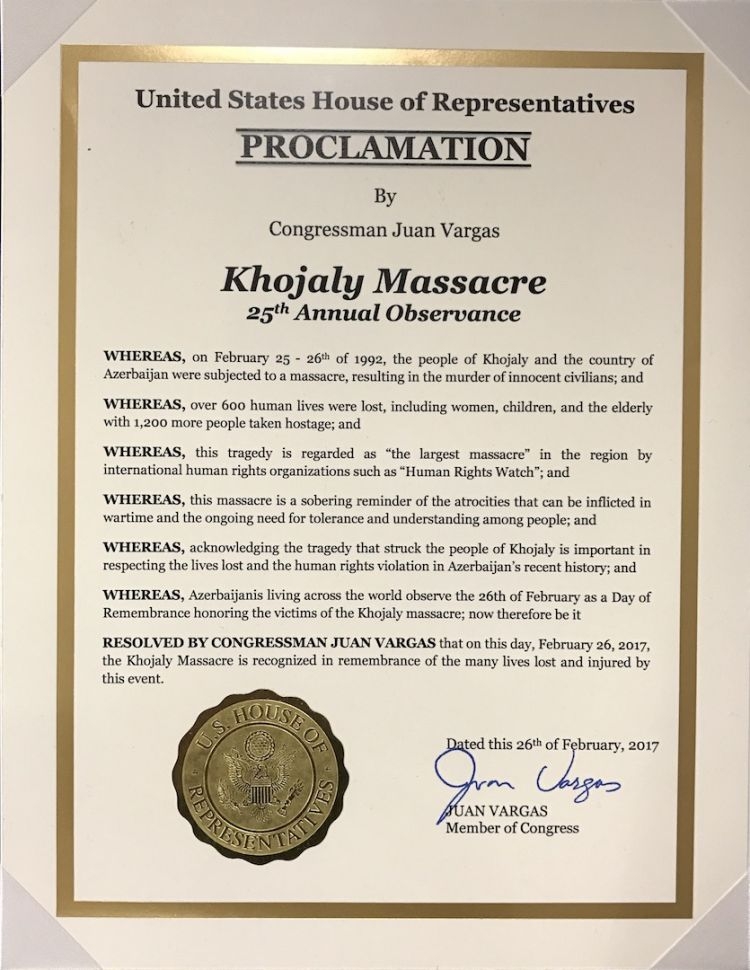 Over 600 human lives were lost, including women, children, and the elderly, with 1,200 more people taken hostage.

On the eve of the 25th anniversary of the Khojaly Massacre, which was committed by Armenia’s armed forces against the Azerbaijani civilians in 1992, U.S. Congressman Juan Vargas from California issued a proclamation, honoring the victims of the tragedy and condemning this atrocity, the Consulate General of Azerbaijan in Los Angeles told APA.

Sent to the Consulate General of Azerbaijan in Los Angeles, the proclamation reads: “On February 25-26, 1992, the people of Khojaly and the country of Azerbaijan were subjected to a massacre, resulting in the murder of innocent civilians. Over 600 human lives were lost, including women, children, and the elderly, with 1,200 more people taken hostage. This tragedy is regarded as “the largest massacre” in the region by international human rights organizations such as “Human Rights Watch”. The massacre is a sobering reminder of the atrocities that can be inflicted in wartime and the ongoing need for tolerance and understanding among people.”

Representing California’s Imperial County and San Diego County in the U.S. Congress since 2013, Congressman Vargas is a member of the Democratic Party and serves on the House Financial Services Committee. Previously, he served in the California State Senate and State Assembly, as well as on the City Council of San Diego.