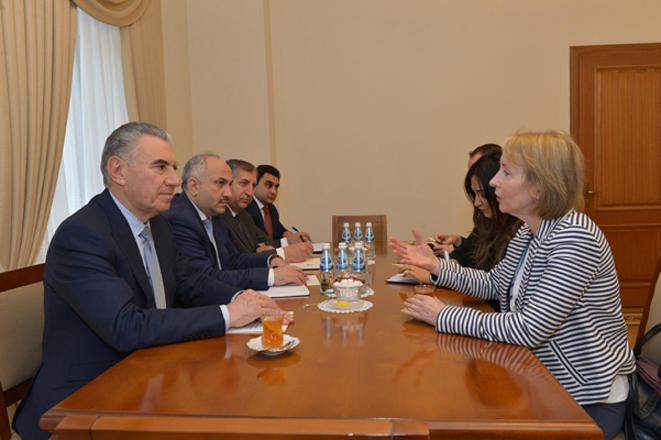 The world community should help in the settlement of the Armenia-Azerbaijan Nagorno-Karabakh conflict, said the UK Ambassador to Azerbaijan Carole Crofts.

Crofts made the remarks during her meeting with Azerbaijan’s deputy prime minister, Chairman of the State Committee for Refugees and IDPs Ali Hasanov., Trend reports.

The ambassador expressed regret with the fact that Armenia keeps status quo and emphasized that the United Kingdom supports the conflict’s peaceful settlement.

Ali Hasanov, for his part, spoke about good relations between Azerbaijan and the United Kingdom and said that about 1,550 UK companies operate in Azerbaijan’s oil and non-oil sectors.

The deputy prime minister praised the UK’s support at international organizations for Azerbaijan’s fair position on the Nagorno-Karabakh conflict.

Hasanov brought to the attention of the UK ambassador the inadmissibility of illegal visits and activities of UK citizens and companies in the occupied Azerbaijani territories, sales of the gold, unlawfully extracted from a mine in the occupied Azerbaijani territories and processed in Armenia, in many European countries, including on the London Stock Exchange.

He also emphasized the importance of preventing such unpleasant facts.

The deputy prime minister reminded that Armenia still ignores and doesn’t implement the decisions and resolutions adopted by international organizations on Armenia’s withdrawal from the occupied Azerbaijani territories and return of refugees and IDPs to their native lands.

“Armenia intensively violates the negotiation process. The Armenian authorities do not want to resolve the conflict; they continue to occupy our lands with the help of their patrons and continue to hold a destructive position. International community does not exert any pressure on the aggressor country,” said Hasanov.

He added that over the past 20 years, Armenia has not achieved any success.

“The country’s economic situation has seriously deteriorated and the aggressor country is isolated from international and regional projects implemented with participation of Azerbaijan,” according to Hasanov.

Further during the meeting, Carole Crofts said she will make every effort to expand the mutual cooperation in political, economic, cultural, energy security and other areas.

The ambassador added that work is carried out to implement a number of projects in various spheres between the two countries.

Crofts reminded that the UK has been successfully cooperating with Azerbaijan for more than 20 years. She noted that BP is the company that invested the most in Azerbaijan.

The envoy said she got acquainted with various Azerbaijani regions and she was deeply impressed by the hospitality of the Azerbaijani people.

She highlighted Azerbaijan's rapid development in recent years and elevation of its image on the international arena.