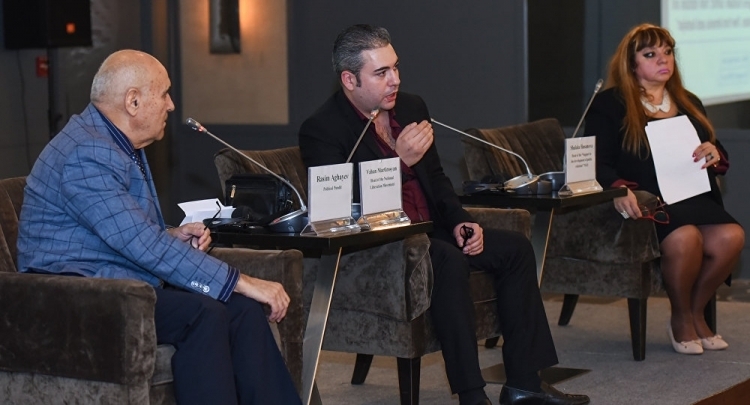 The Platform is an initiative of the citizens of Azerbaijan and Armenia who wish to contribute to the peaceful settlement of the conflict.

News.Az reprints the statement from APA:

The Platform is an initiative of the citizens of Azerbaijan and Armenia who wish to contribute to the peaceful settlement of the conflict.

The initiative on the creation of the Platform has generated the interest of the international community as well as attracted the high level of public attention in both conflicting states. A large number of well-known experts highly appreciated this initiative and stressed the very special role of the above-mentioned peacekeeping initiative in the process of the peaceful settlement of the conflict. The representatives of NGOs and civil society activists of both countries expressed their wish to join the Platform and take an active part in the process of the establishment of a long-standing peace between Armenia and Azerbaijan. The above-mentioned proves that the establishment of the Platform was a timely move for achieving these objectives.

However, the Armenian public activists standing for peace and willing to join the Platform are subjected to serious pressures by the government of Armenia and law-enforcement agencies of the country. A young writer, Lusine Nersisian, was temporarily arrested in Nagorno-Karabakh right after her interview in Azerbaijani mass-media where she had expressed her support for the peaceful initiative. Relatives of civil society activist, Armen Virabyan, who requested political asylum in Azerbaijan, were subjected to persecution in Yerevan. Social activist from Yerevan, Tamella Arzumanyan and writer from the USA Anna Paitian as well as their relatives were also subjected to persecution and pressure”, it said.

According to the statement, taking into consideration the above mentioned, the Armenia-Azerbaijan Platform for Peace calls on the international community to make appropriate efforts in order:

1.  to prevent repression and pressure against those who are willing to join “the Armenia-Azerbaijan Platform for Peace” from Armenia;

3.  to stop pressures against the family members and relatives of public activist Armen Virabyan residing in Germany;

4.   to end oppression against public activist Tamella Arzumanyan and her family members;

5.   to stop acts of intimidation against writer Anna Paitian from the US;

6.   to encourage joining of ordinary citizens, civil society activists and representatives of NGOs to the Platform from both countries

The statement was signed by:

From the Azerbaijani side – Rovshan Rzayev, member of the Azerbaijani Community of Nagorno-Karabakh; Kamil Safarov, professor of the Baku State University; Shalala Hasanova, chairwoman of the Public Union “Support for the Development of Communication with Public”; Novella Jafaroglu, chairperson of the Dilara Aliyeva Society for Women’s Rights; Parvana Mammadova, civil society activist; Rasim Aghayev, deputy chairman of the Union of Journalists of Azerbaijan; Umud Mirzoyev, chairman of the International Eurasia Press Fund.