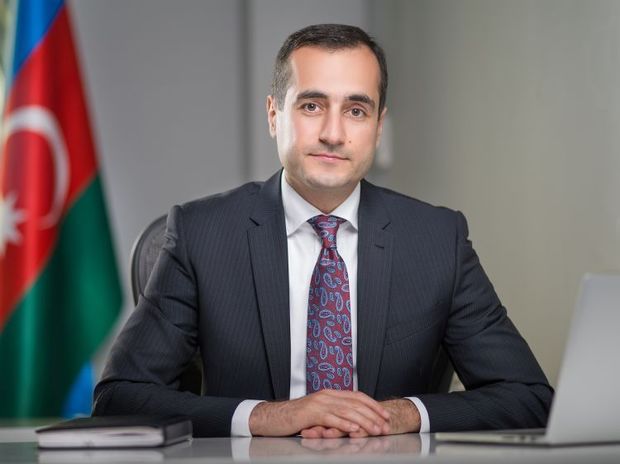 Head of the Department of Youth Policy and Sport Issues of Presidential Administration, assistant to the first vice-president Yusuf Mammadaliyev’s interview to

After finishing the secondary school #134, Yusuf Mammadaliyev was admitted to the faculty of “State and municipal management” of the Baku Institute of Social Administration and Political Science. After receiving a bachelor's degree, he continued education at the Academy of Public Administration under the President of the Republic of Azerbaijan. In 2001, having graduated with a diploma of distinction of the faculty of "Administrative Management" he received his master's degree on the specialty of "State and Municipal Administration".

In 1997, Yusuf Mammadaliyev started his diplomatic career on his 18 at the Ministry of Foreign Affairs as a referent and attache in the Department of International Organizations in 1997-2002.

In 2002-2005, he worked as Attache of the Permanent Mission of Azerbaijan to the United Nations.

In 2003, under Leila Aliyeva’s leadership he participated in the pre-election campaign of Ilham Aliyev as part of the youth initiative group under the slogan “Ilhamla Ireli” (Forward With Ilham).

In the years 2005-2009, he worked as the second, and then the first secretary of the Office of Security Problems of the Ministry of Foreign Affairs of Azerbaijan.

In 2009-2011, he was the First Secretary, Adviser of the Azerbaijani Embassy in Spain.

He received the diplomatic rank of the First Secretary of the first class for the activities in the process of electing Azerbaijan as a non-permanent member of the UN Security Council on November 14, 2011.

He worked as the head of the department of the Ministry of Foreign Affairs of Azerbaijan from May 1 to December 30, 2013 and received the diplomatic rank of adviser of the first class.

From January 2014 he continued his activity as an expert at the Heydar Aliyev Foundation and executive director of the Public Association İDEA.

How do you assess your appointment by the head of state?

First of all, I would like to note that the structural changes carried out under the order of the president are aimed at ensuring dynamism, flexibility and optimality in the activity of the country's supreme executive body in accordance with the new situation and challenges. Strong presidential institution is undoubtedly a necessary term for stable and sustainable governance. As you know, those appointed as assistants to the president have many years of management experience. The establishment of the Department of Youth Policy and Sport Issues under Administration of the President of the Republic of Azerbaijan is aimed at successful implementation of the reforms set up by the president and more effective fulfillment of tasks. I   want once again to express my gratitude to Mr. President and state that I would do my best to justify his confidence.

It was reported that you was appointed as an assistant to the first vice-president as well. Is it true?

Yes, it's true. Generally, today Azerbaijan is passing through an important stage of reforms. Following the referendum held on September 26, 2016, purposeful measures have been implemented in Azerbaijan for formation of efficient and flexible governance mechanism, strengthening vertical of executive power and executive discipline and improving the economic management mechanism to ensure the effectiveness and consistency of economic reforms. The creation of the post of the first vice-president and Mrs. Mehriban Aliyeva’s appointment as the first vice-president are an important part of these reforms. Mehriban Aliyeva is obviously serving the state and public both as a public figure and President of the Heydar Aliyev Foundation. Her historical and disinterested services are welcomed by every citizen of Azerbaijan, foreign governments and agencies. Thus, I comprehend important obligations and responsibilities of the post of the assistant to the first vice-president.

Your post has been newly-established. It is interesting to know your opinion about this field and direction. Will any new projects be implemented?

Youth and sport issues are one of the priorities of the state policy founded by national leader Heydar Aliyev and today successfully continued by President Ilham Aliyev. The state care and attention towards young people is increasing every year. As younger generation is an innovative potential of the country, promotion of their activities, intensive exchange of views with young people, formation of a competitive staff are priority directions. Both mental and physical capabilities of energetic and productive younger generation contribute to economic, cultural and social development in the world's developed countries. Currently, professional environment is becoming younger in all fields in Azerbaijan.

Today, the main objectives of the youth policy in Azerbaijan are achieving high spirit of patriotism among young people, their better education, making them to spend spare time more efficiently, increasing their success in sports and contributing to the solution of their employment, health, social problems.

As a result of the sports policy realized in Azerbaijan, the country has become a venue to conduct prestigious international competitions. We will always support young people and their future children so that they may see their future in the Motherland.

Owing to the creation of such a structure in response to the challenges of the modern world, Azerbaijani youth will achieve success as a result of our activities with the support of the Head of the State and the First Vice-President.