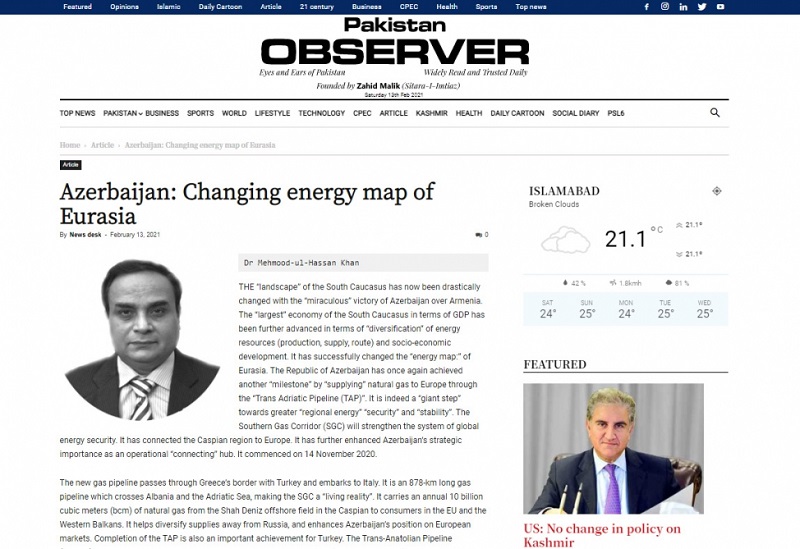 The article reads: “The “landscape” of the South Caucasus has now been drastically changed with the “miraculous” victory of Azerbaijan over Armenia. The “largest” economy of the South Caucasus in terms of GDP has been further advanced in terms of “diversification” of energy resources (production, supply, route) and socio-economic development. It has successfully changed the “energy map:” of Eurasia. The Republic of Azerbaijan has once again achieved another “milestone” by “supplying” natural gas to Europe through the “Trans Adriatic Pipeline (TAP)”. It is indeed a “giant step” towards greater “regional energy” “security” and “stability”. The Southern Gas Corridor (SGC) will strengthen the system of global energy security. It has connected the Caspian region to Europe. It has further enhanced Azerbaijan’s strategic importance as an operational “connecting” hub. It commenced on 14 November 2020.

The new gas pipeline passes through Greece’s border with Turkey and embarks to Italy. It is an 878-km long gas pipeline which crosses Albania and the Adriatic Sea, making the SGC a “living reality”. It carries an annual 10 billion cubic meters (bcm) of natural gas from the Shah Deniz offshore field in the Caspian to consumers in the EU and the Western Balkans. It enhances Azerbaijan’s position on European markets. Completion of the TAP is also an important achievement for Turkey. The Trans-Anatolian Pipeline (TANAP), Turk-Stream and the TAP have now transformed Turkey from an importer to a transit route for gas. It has further consolidated the noble concept of “One Nation-Two States” between the countries. The British energy giant BP, SOCAR and Italian gas company Snam, with a 20 percent holding each are the main stakeholders in the TAP. Moreover, the Fluxys holds a 19 percent stake, Enagas with 16 percent and Axpo with 5 percent. The first phase of the Shah Deniz field started production in 2006, delivering more than 10 bcm a year of gas to Azerbaijan, Georgia and Turkey. The second phase started output in 2018, adding 16 bcm of gas production capacity at its peak to bring the total capacity to 26 bcm.

Rovnag Abdullayev, head of Azerbaijani state-owned petroleum company SOCAR, highlighted the start of the gas sales to Europe as a “historic day.” Whereas, Marija Savova, TAP’s head of commercial activity termed its start as a significant milestone for Europe’s gas market. He elaborated its short and long-term plans highlighting launching the second phase of market test in the summer, enabling the future expansion of the TAP, doubling the pipeline’s capacity to 20 bcm. Luca Schieppati, TAP’s Managing Director termed the start of TAP as a historic day for Azerbaijan, host countries and Europe’s energy landscape too. He projected it as an essential part of the continent’s gas network, contributing to the energy transition roadmap which offered a reliable, direct and cost-effective transportation route to South East European countries and beyond.

Italy, Greece and Bulgaria are clear beneficiaries of the TAP. Azerbaijan aims to supply European gas markets with 10 bcm of gas a year, including 8 bcm to Italy and a combined 2 bcm to Greece and Bulgaria. DEPA and Bulgargaz have each signed long-term contracts with the Shah Deniz consortium for 1 bcm a year. It covers about a quarter of annual demand in Greece and a third in Bulgaria. Europe’s annual consumption stands at around 500 bcm, used mostly in power generation. The TAP is a part of the $40 billion (TL 297 billion) Southern Gas Corridor (SGC), stretching 3,500 kilometres (2,175 miles) from Azerbaijan to Europe and drawing from Azerbaijan’s giant Shah Deniz-II field in the Caspian Sea.

The 878-kilometer pipeline connects with the Trans-Anatolian Natural Gas Pipeline (TANAP) at the Turkish-Greek border in Kipoi and crosses Greece, Albania and the Adriatic Sea before coming ashore in southern Italy. The TANAP, a significant joint project between Ankara and Baku, is the Turkey part of the SGC and was inaugurated by President Recep Tayyip Erdoðan and Azerbaijan President H.E. Ilham Aliyev in June 2018. The TANAP passes from the Turkish border with Georgia, crosses 20 Turkish provinces and ends at the Greek border in Edirne in Thrace. It has an annual capacity of 16 bcm, of which 6 bcm will be delivered to Turkey, while the remaining is destined for European markets via the TAP.

Azerbaijan has been contributing and supporting greater energy cooperation through its meaningful participation and implementation of mega trans-regional energy projects. It supported the EU’s efforts to diversify gas supply, and implemented the Southern Gas Corridor (SGC). It hopes that the 3,500-km project will change the energy map of the Eurasian region by bringing natural gas from the Caspian region to European markets. The Southern Gas Corridor provides a means of diversification. It consists of four parts. The first phase of the project the Shah Deniz-2 has been completed. Shah Deniz gas will be transported over 3,500km, rising to an altitude of 2,500m and descending to a depth of 800m.

The second phase of the project, the South Caucasus Pipeline (SCP), has already been commissioned. The length of the pipeline, connecting Azerbaijan to Turkey through Georgia, is 691km. The Trans-Anatolian Gas Pipeline (TANAP) is the third phase. The pipeline is 1,850km-long, extending to the western border of Turkey as a continuation of the SCP. TANAP, supplies Azerbaijani gas to Turkey and Europe, is connected to SCP on the Turkish-Georgian border and to the Trans-Adriatic Pipeline (TAP) along the Turkey-Greece border. Trans-Adriatic Pipeline (TAP) is the fourth phase of the project. The length of the pipeline is 878km and 100 of construction completed. The pipeline runs from Greece via Albania through to the Adriatic Sea to Italy. During 2020, it is started transporting Azerbaijani gas to Europe. On 30 November 2019, the opening ceremony of the section of the TANAP that merges with TAP took place.

Azerbaijan has adopted a massive energy diversification policy since 2016 because of the drastic decline in oil prices in the world market. It introduced numerous structural reforms in its Marco-economy which ultimately boosted its non-oil national economy. Resultantly, Azerbaijan ranked 34th overall out of 190 countries in the Doing Business 2020 report: first in “Getting Credit”, 9th in “Starting a Business” and 28th in “Enforcing Contracts”. Being a prominent regional expert of Azerbaijan & CIS, I rate incorporation/inauguration of the TAP as a victory of Azerbaijan’s commercial diplomacy which has now changed the geography, composition and energy map of Eurasia.”