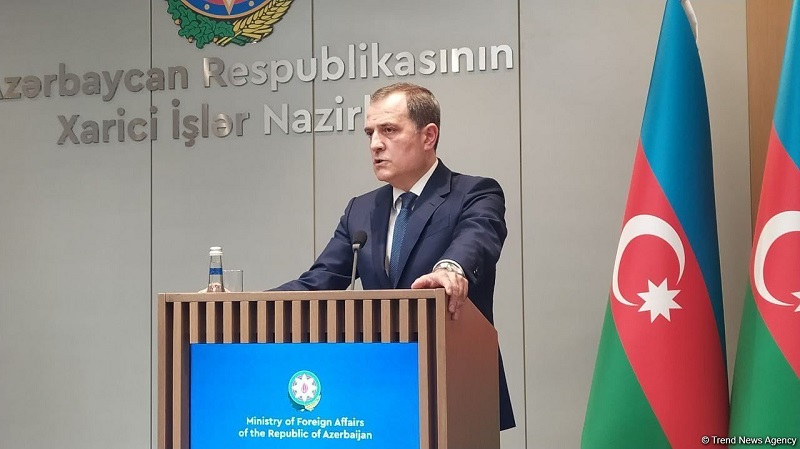 Azerbaijan is ready to cooperate with Lithuania on the basis of the principle of territorial integrity and inviolability of borders, said Azerbaijani Foreign Minister Jeyhun Bayramov.

Bayramov made the remarks at a joint press conference with his Lithuanian counterpart Gabrielius Landsbergis in Baku on Friday.

“I believe that cooperation can contribute to both regional and global peace,” the Azerbaijani minister said.

Bayramov stressed that the views on the new realities that emerged after the 44-day second Armenia-Azerbaijan Nagorno-Karabakh War were exchanged with his Lithuanian counterpart.

"Thanks to the signing of the trilateral declaration [on ceasefire and cessation of all hostilities in the Nagorno-Karabakh region], positive results have been achieved in a number of spheres, but there are still some important issues of concern to the Azerbaijani side, which I brought to the attention of my Lithuanian colleague during the meeting,” Bayramov said.

“One of these issues is the unfair statements of the Armenian side about the presence of "prisoners of war" in Azerbaijan,” the Azerbaijani minister said. “Once again, I would like to bring to your attention that the individuals who were illegally sent to the country after the November 10, 2020 agreement were neutralized during an operation carried out by the Azerbaijani security forces while 62 people were detained.”

“The investigative measures are underway against them and their actions will be assessed in accordance with the Azerbaijani legislation," Bayramov added.