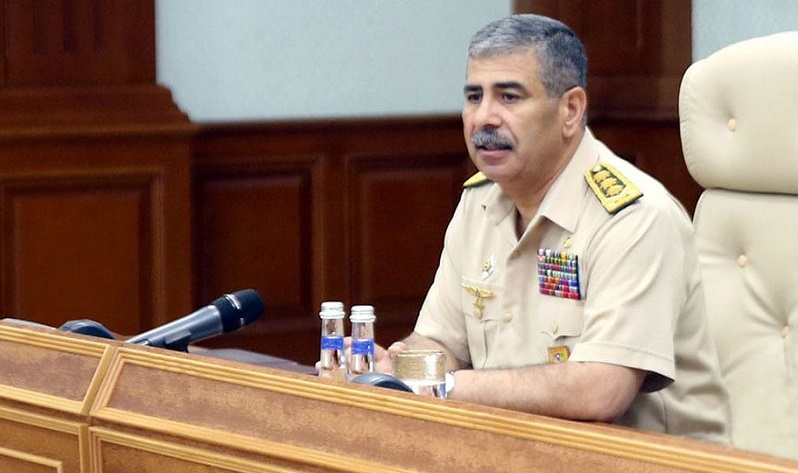 Deputies of Minister of Defense, Commanders of types of troops, Chiefs of Main Departments, Departments and Services of the Ministry participated in the meeting, News.Az reports citing the Defense Ministry.

Commanders of the Army Corps and formations stationed in the liberated territories were also involved in the meeting via video teleconference.

The minister congratulated military personnel, who were awarded with high military ranks by the relevant order of President of the Republic of Azerbaijan Ilham Aliyev, and expressed his belief that they will justify the placed trust.

Minister Hasanov emphasized that at the opening of the military unit in the Kalbajar region the Supreme Commander-in-Chief once again appreciated the activities of the Azerbaijan Army and expressed his confidence that the Army will successfully cope with all assigned tasks in the direction of properly fulfilling the new duties, defending the territorial integrity of state and protecting its borders. The Minister of Defense gave relevant instructions to be ready at any time to prevent possible provocations of revanchist forces.

At the meeting, the operational conditions on the Azerbaijani-Armenian state border and the Karabakh economic zone were extensively analyzed, specific tasks were given to strengthen the material, technical and combat support of the units, to improve the service combat activities of military personnel, and also to increase the vigilance of personnel.

The minister positively assessed the activity of the newly established Operations Commando military units, as well as their manning. Colonel General Hasanov gave appropriate instructions to pay special attention to the combat training of the commandos.

The minister heard the reports on the activities of the National Defense University, and emphasized the importance of using the scientific potential effectively, increasing the quality of research in military science, including researching modern combat operations with scientific approaches, and using new methods in military educational institutions.

Due to the rise in air temperature, the importance of controlling the strict compliance with the requirements of the special regime applied in order to prevent cases of heatstroke and sunstroke among military personnel, as well as fire and other safety rules were noted.

Hasanov gave instructions regarding the organization of military service in the units deployed in the liberated territories, the continuation of the necessary measures for engineering support, as well as the work done in the direction of the creation of a new military infrastructure in order to further improve the service and combat, social-living conditions.

The minister set tasks to the relevant persons to place the conscripts, who were distributed electronically in military units in accordance with the order of the Supreme Commander-in-Chief, and at the same time, to carry out the work on releasing the active military servicemen to the reserve in an organized manner.