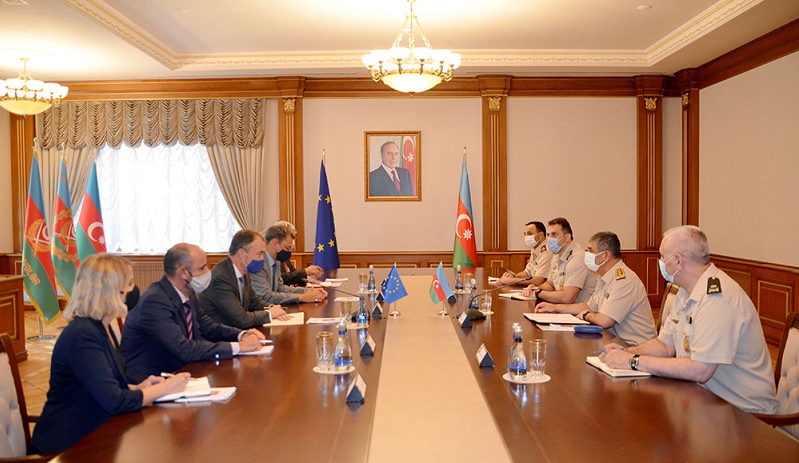 On September 16, the Minister of Defense of the Republic of Azerbaijan, Colonel General Zakir Hasanov met with a delegation headed by European Union Special Representative for the South Caucasus Toivo Klaar, Azerbaijani Defense Ministry told News.Az.

The Minister of Defence informed about the work done in the liberated territories after the Patriotic War that ended with the glorious victory of the Azerbaijan Army under the command of the President of the Republic of Azerbaijan, Supreme Commander-in-Chief of the Armed Forces, Mr. Ilham Aliyev.

Speaking about the situation on the Armenian-Azerbaijani state border and the territory of Azerbaijan, where the Russian peacekeeping contingent is temporarily deployed, the Minister noted that the Azerbaijan Army fully complies with the obligations of the Trilateral Statement. It was stressed that provocations committed by illegal Armenian armed formations in the territory of Azerbaijan, where the Russian peacekeepers are temporarily deployed, have been prevented and appropriate measures will be taken against such cases that may occur in the future.

Stressing that recent attempts made by the Armenian side to aggravate the situation are unacceptable, the Minister noted the importance of assessing and taking relevant actions by the international community.

Mr.T.Klaar noted that the European Union was ready to provide relevant support to ensure peace in the region.

The sides also discussed post-war conditions and a number of other issues.