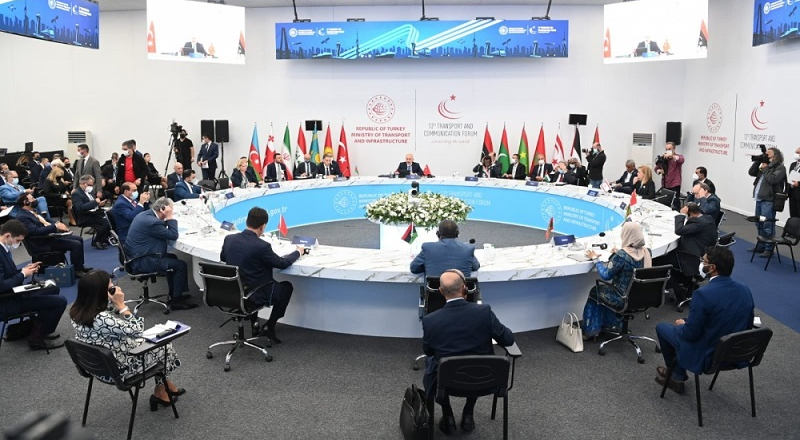 An Azerbaijani delegation led by Minister of Transport, Communications and High Technologies Rashad Nabiyev is on a visit to Turkey to participate in the 12th International Transport and Communications Council.

The main topic of the discussion at the event is the development of transport and communication systems in the post-pandemic COVID-19, the expansion of digitalization.

During the visit, Rashad Nabiyev met with Turkish Minister of Transport and Infrastructure Adil Karaismailoglu and former Prime Minister, Deputy Chairman of the Justice and Development Party Binali Yildirim. During the meeting, an exchange of views took place on the construction of the Baku-Tbilisi-Kars railway.

Rashad Nabiev took part in the meeting of the ministers of the 12th Transport and Communications Council on the topic “Logistics, Mobility and Digitalization”.

The meeting discussed issues of investment in transport and communications to support global development, efficient use of transport and logistics systems through digitalization, creating a sustainable transport system and improving the relevant regulatory framework.

In his speech, Minister Rashad Nabiyev said that the post-pandemic period of COVID-19 will require closer regional cooperation, and regional integration mechanisms can play an important role in this context. “We must continue to work to improve cross-border communication through transport corridors. It is important to step up our efforts to facilitate transit, digitalize operations and remove regulatory and procedural barriers to transport and trade.”

It was noted that in 2015, Azerbaijan, together with its partners through the project of the Trans-Caspian International Transport Route, revived this corridor. The corridor currently originates in China, passes through Kazakhstan, the Caspian Sea, Azerbaijan and Georgia and extends to Ukraine, Bulgaria and Romania. In 2020, despite all the difficulties related to the pandemic, 8.4 million tons of cargo was transported along the East-West corridor.

It was stressed that in October 2017, the Baku-Tbilisi-Kars railway connecting the Trans-European and Trans-Asian railway networks was put into operation. With a freight capacity of 6.5 million tons per year, the railroad allows reducing transit times between China and Southeast Europe by 70 percent.

“Azerbaijan has begun massive restoration of Karabakh, liberated from the Armenian occupation. The restoration of transport infrastructure and the reconstruction of railway corridors will not only expand the integration of the railway network in the South Caucasus, but also provide the shortest route from Western China to the Mersin port of Turkey,” the minister said.