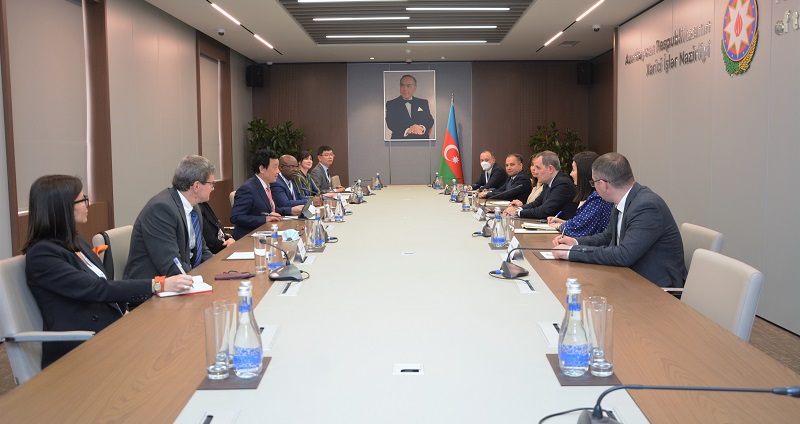 Azerbaijan’s Foreign Minister Jeyhun Bayramov on Friday met with the Director-General of the Food and Agriculture Organization of the United Nations (FAO) Qu Dongyu, the Foreign Ministry told News.Az.

Welcoming Qu Dongyu, Minister Bayramov stressed that our country has always attached importance to cooperation with the UN and its specialized agencies. Noting that this year marks the 30th anniversary of our membership in the UN, the minister emphasized that mutually beneficial cooperation has been implemented between Azerbaijan and the FAO during this period. It was noted that Azerbaijan pays special attention to food security.

Director-General Qu Dongyu expressed satisfaction with his visit to Azerbaijan and his fruitful meetings with the country's officials. He stressed that Azerbaijan has great potential for the development of food systems and agriculture. The Director-General drew attention to the development of cooperation in the field of digital transition in agriculture, the application of innovations, farmers' education.

Minister Bayramov informed the opposite side about the reconstruction work carried out in the liberated territories of the country, including work in the field of agriculture and alternative energy, as well as the concept of "smart village" implemented in these areas. The minister stressed the good cooperation and exchange of best experience with the UN specialized agencies in the process of restoration and reconstruction.

At the meeting, discussions were held on the topic of agro-e-commerce or digital agriculture and food, research and development (R&D) projects, as well as digital development of rural areas, and the importance of continuing cooperation between Azerbaijan and FAO in these areas were emphasized.