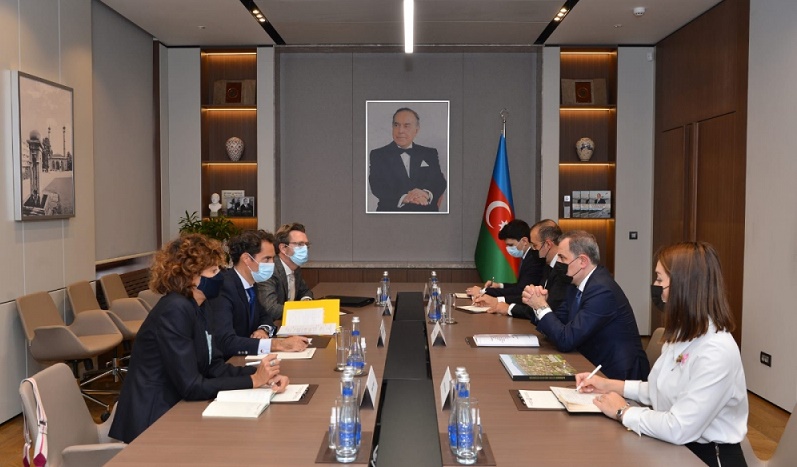 Minister Jeyhun Bayramov noted that Azerbaijan shared a mutually beneficial partnership with NATO, noting with satisfaction the cooperation in a number of areas. Emphasizing that Azerbaijan is a reliable partner of NATO, the FM spoke about the shared values in ensuring international security and, in this regard, the participation of Azerbaijani peacekeepers in NATO operations. The opposite side was informed that in the joint statements adopted following the NATO summit on the settlement of the former Armenia-Azerbaijan conflict, the Azerbaijani side highly appreciated the position of supporting the sovereignty and territorial integrity of the partner countries.

Minister Bayramov briefed the NATO Secretary General’s Special Representative on the latest situation in the region, including the policy pursued by Armenia for decades to destroy Azerbaijani historical, cultural, and religious heritage, illegal activities and consequences, the restoration and reconstruction work currently being carried out by the Azerbaijani Government in the liberated territories, as well as the demining of territories, and the work carried out by Azerbaijan in connection with the implementation of trilateral statements. The NATO official was informed that Azerbaijan, by eliminating the fact of occupation of the territories, is ready to normalize relations with Armenia on the basis of the principles of international law.

Javier Colomina Píriz said that the discussions with the Azerbaijani side during his visit to the region were very useful in terms of obtaining detailed information on the current situation in the region. The activities of Azerbaijani peacekeepers together with Turkish forces in Afghanistan, especially in connection with the evacuation of civilians from Kabul airport, were praised, and the special envoy expressed gratitude on behalf of the Allies. He noted that NATO supports the normalization of relations between Armenia and Azerbaijan.

The sides also exchanged views on the NATO-Azerbaijan partnership agenda, as well as future prospects.