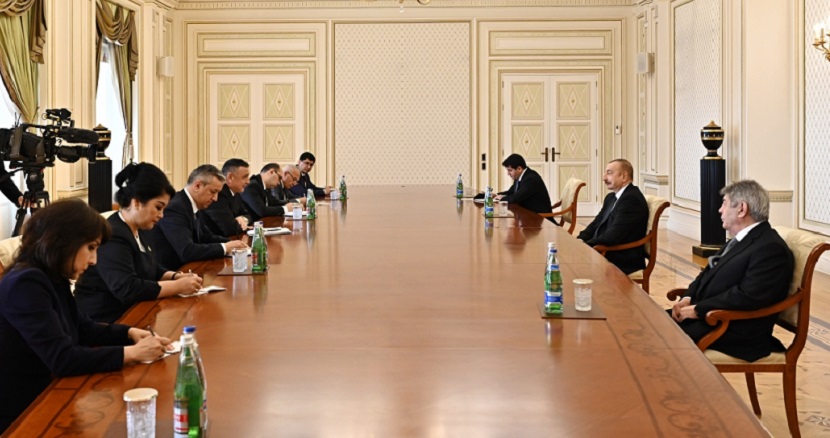 President Ilham Aliyev hailed the successful development of brotherly relations between Azerbaijan and Uzbekistan in all areas, especially in the political sphere, noting the importance of relations between the two countries' leaders. The President recalled with satisfaction his visit to Uzbekistan in this regard. President Ilham Aliyev noted that historical, linguistic and cultural proximity between the two countries had laid the foundation for strengthening bilateral relations.

Pointing to the economic cooperation, the President emphasized the importance of increasing the level of trade and underlined good opportunities for that. Indicating that a lot had been done in the field of transport infrastructure in both Azerbaijan and Uzbekistan, President Ilham Aliyev said there were prospects for expanding cooperation in this direction and for the full launch of transport corridors. Noting the two countries’ achievements in the economic sphere, the President underlined the importance of considering the possibility of mutual investment and joint investment in projects in other countries.

With regard to relations between the legislative bodies of Azerbaijan and Uzbekistan, President Ilham Aliyev said that mutual visits and relations in international inter-parliamentary structures had also contributed to cooperation in this field.

The head of state stressed that the attitude of fraternal Turkic states to the restoration of Azerbaijan's territorial integrity was highly appreciated by the country.

Touching upon Azerbaijan's international relations, President Ilham Aliyev indicated that Azerbaijan had good relations with all countries, including neighboring states, and reiterated that the Azerbaijani side had offered to sign a peace agreement with Armenia.

The President expressed his confidence that Nurdinjon Ismoilov's visit to Azerbaijan would contribute to the development of bilateral relations.

President Ilham Aliyev thanked for Shavkat Mirziyoyev’s greetings and asked the Speaker to extend his greetings to the Uzbek President.

Nurdinjon Ismoilov said that the President of Uzbekistan had always held the memory of the great political figure, great leader Heydar Aliyev in high esteem, adding that President Ilham Aliyev was successfully continuing the policy of the national leader. Speaker Ismoilov stressed that the great leader was a political figure who had devoted his entire life to the development of Azerbaijan.

The Speaker of Legislative Chamber of Uzbekistan`s Oliy Majlis noted that he was deeply impressed by the development processes in Baku and congratulated President Ilham Aliyev on the achievements of the country.