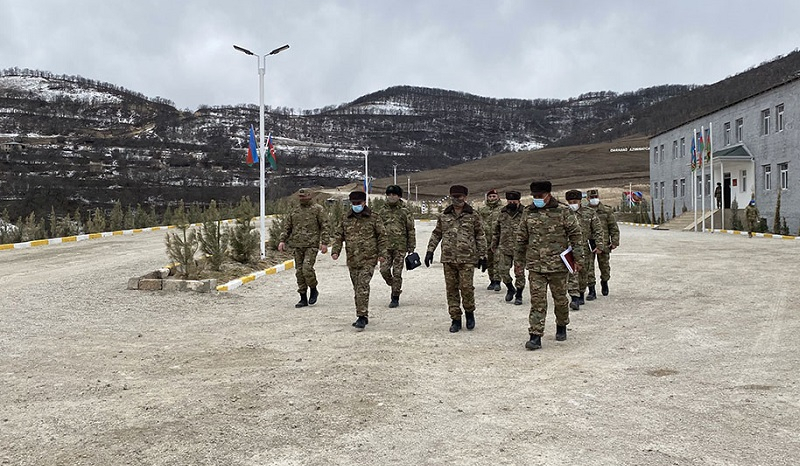 Defense Minister, Colonel General Zakir Hasanov, and the leadership of the Ministry inspected the recently built and overhauled military infrastructures in the military unit stationed in the Lachin region.

After getting acquainted with a residence of the military personnel, Minister Hasanov was reported that conditions that meet modern requirements have been created for servicemen serving in mountainous areas with harsh climatic conditions and difficult terrain. There is a headquarters building, barrack, bath and sanitary facility, food and clothing warehouses, ideological room, classroom, office premise, amenity premise and weapon room, which are equipped with a heating system. The canteen building designed to feed the military personnel is provided with modern stoves, refrigerators, as well as other household appliances and inventory.

Generators provide the military units with an uninterrupted power supply. Various tree species have been planted on the territory, landscaping lanes have been laid and a sports area was built.

The defense minister then visited the medical point of the military unit. It was reported that modern medical equipment has been installed here for the examination and treatment of servicemen, there is a mobile X-ray device and ambulances for evacuation. He met with the servicemen receiving treatment at the medical point, enquired about their health, wished them a speedy recovery and return to their duty areas.

Minister Hasanov also inquired about the conditions of maintenance, operation and quality of service of military equipment in the park for combat and car equipment.

Then, at a meeting with military personnel, Hasanov spoke about the work done under the leadership of President, Supreme Commander-in-Chief of the Armed Forces Ilham Aliyev, and the reforms carried out in the field of army development. The minister again brought to the attention of the personnel that the head of state highly appreciates the examples of heroism demonstrated in the April battles of 2016, the Gunnut victory in 2018, the Tovuz battles of 2020 and the 44-day Patriotic War. He stressed that equipping the Azerbaijani Army with the most modern weapons and military equipment will continue as planned.

Touching upon the activities of forces seeking to undermine the authority of the Azerbaijan Army in the information sphere after the victory in the Patriotic War, Minister Hasanov emphasized the importance of protecting military and official secrets, called for vigilance against the spread of slanderous and provocative information.

At the meeting, the servicemen noted that they proudly serve in the liberated territories and expressed gratitude to the Supreme Commander-in-Chief of the Armed Forces and the leadership of the Ministry of Defense for the conditions created here, as well as shown attention and care.

Minister Hasanov inquired about the service and combat activities of the military units, gave specific instructions on the fulfillment of the tasks set by the head of state to the Azerbaijan Army, as well as on the organization of combat duty and further improvement of the combat capability of the troops.