Azerbaijan’s main goal is to return former IDPs to their homeland as soon as possible: President Aliyev 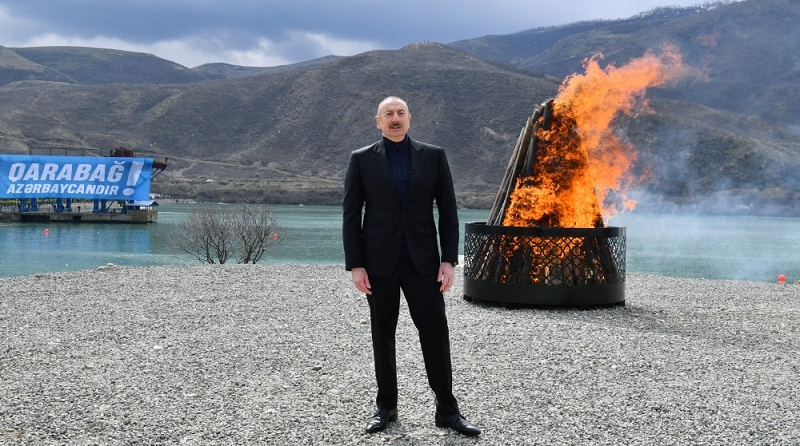 The Azerbaijani state’s main goal is to return the former IDPs to their homeland as soon as possible, President Ilham Aliyev in his message of congratulations to the people of Azerbaijan as he lit the holiday bonfire in Sugovushan settlement, Tartar district, News.Az reports.

“Sugovushan is a historic place of ancient Azerbaijan. The Azerbaijani people have lived in these areas for centuries. However, in 1923, the Nagorno-Karabakh Autonomous Region was established illegally and without any grounds in our native Karabakh. The beautiful places of Karabakh were included in this so-called entity, including the city of Shusha and the settlement of Sugovushan. This was yet another injustice, yet another act of enmity against our people. Because Karabakh and its history are connected with the Azerbaijani people,” the head of state noted.

President Aliyev noted that the Azerbaijani people have lived in Karabakh for centuries.

“The so-called Nagorno-Karabakh Autonomous Region functioned here for many years during the Soviet era for purely political purposes. As you know, the Armenians pursued a policy of aggression against our people, and our native Karabakh and a part of East Zangazur were in the hands of Armenians for about 30 years. It had to end and it did,” he added.

“We saw that no negotiations or political steps were bringing us any closer to our goal. We saw and knew that we must be stronger and more determined to protect our rights and restore historical justice. The Azerbaijani state, the Azerbaijani Army, all our Armed Forces fulfilled this historic mission in 2020. We fought, shed blood, gave martyrs, liberated our homeland from Armenian occupation and returned to Karabakh. We have already settled here, we have returned here, we have returned to our homeland. Large-scale landscaping work is currently underway in all of Karabakh and East Zangazur. Cities are being rebuilt, villages are being rebuilt. Of course, our main goal is to return the former IDPs to their homeland as soon as possible,” President Aliyev added.