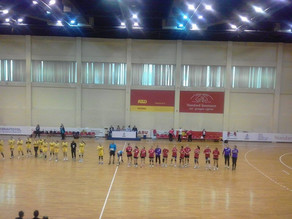 Mammadov told that he hopes the latest changes in federation will impact development of handball in the country. He wished success to participants of the championship.

Huseynzade underlined handball traditions in Azerbaijan: “We have handball sportsmen like Rafiga Shabanova and Lyudmila Shubina. At present, they are NOC members. Our aim is to revive handball. This sport is included in 4th Islamic Solidarity Games’ program. I wish success to our sportsmen both in internal championship and in Islamic Games”.

Head of department in Ministry of Youth and Sports Farid Mansurov marking popularity of this sport, whished success to teams.