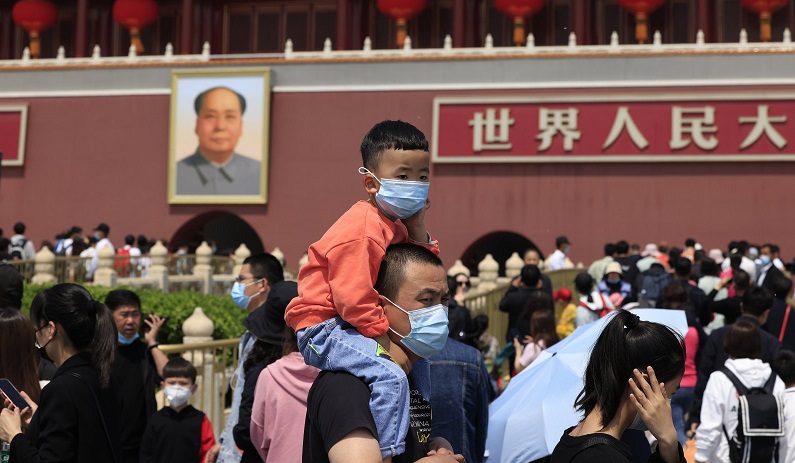 China has loosened its family planning policy to allow couples to have three children after a census showed its population is aging rapidly, state media reported Monday, further weakening four decades of controls in the world's most populous country that have stifled fertility.

The change was approved during a politburo meeting chaired by President Xi Jinping, the official news agency Xinhua reported.

In 2016, China scrapped its decades-old one-child policy – initially imposed to halt a population explosion – with a two-child limit, which failed to result in a sustained surge in births as the high cost of raising children in Chinese cities deterred many couples from starting families.

"To further optimize the birth policy, (China) will implement a one-married-couple-can-have-three-children policy," Xinhua said in a report on the meeting, according to Reuters.

The policy change will come with "supportive measures, which will be conducive to improving our country's population structure, fulfilling the country's strategy of actively coping with an aging population and maintaining the advantage, the endowment of human resources", Xinhua said. It did not specify the support measures.

Despite government efforts to encourage couples to have children, China's annual births have continued to plummet to a record low of 12 million in 2020, the National Bureau of Statistics (NBS) said last month. That threatens a demographic crisis that has alarmed the ruling Communist Party headed by President Xi Jinping, booking in a shortage of young workers to drive the economy. Experts say by 2050 the country will have to support hundreds of millions of elderly, as reported by Agence France Presse (AFP).

The announcement drew a chilly response on Chinese social media, where many people said they could not afford to have even one or two children. "I am willing to have three children if you give me 5 million yuan ($785,650)," one user posted on Weibo Early this month, China's once-in-a-decade census showed that the population grew at its slowest rate during the last decade since the 1950s, to 1.41 billion.

Data also showed a fertility rate of just 1.3 children per woman for 2020 alone, on a par with aging societies like Japan and Italy. Also on Monday, China's politburo said it would phase in delays in the country's retirement ages, but did not provide any details.

Falling marriage rates in recent years have played out in slower birth rates, as have rising costs of living and increasingly empowered and educated women delaying or avoiding childbirth.

The demographic shift in China has significant economic and political implications for the world's second-biggest economy. A third of the Chinese are forecast to be elderly by 2050, heaping huge pressure on the state to provide pensions and health care.