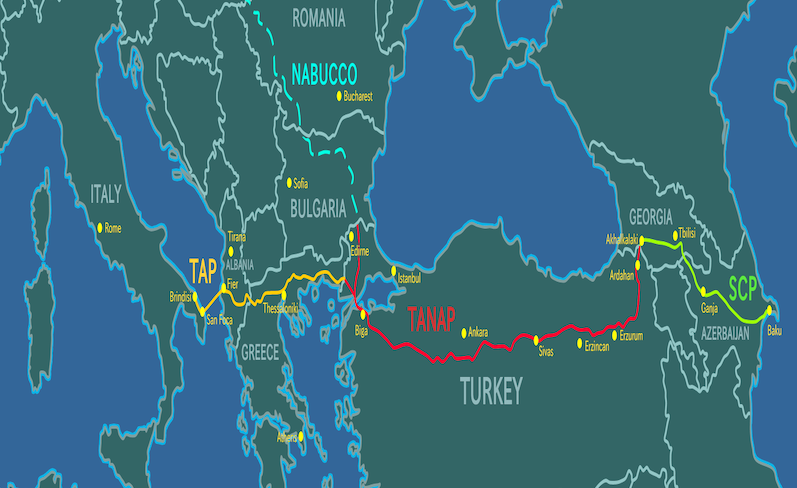 News.Az presents the article by Shahmar Hajiyev, a leading advisor at the Baku-based Center for Analysis of International Relations (AIR Center).

The year 2020 was very difficult for the energy sector, and the COVID-19 pandemic continues to have negative effects on it. Despite all challenges, however, the Trans Adriatic Pipeline (TAP) was completed and began commercial operations on 15 November 2020.

The TAP is the European leg of the Southern Gas Corridor that transports gas to Europe from Azerbaijan’s offshore Shah Deniz Stage Two (SD2) project via Greece and Albania, then under the Adriatic Sea, finally landing in Italy’s municipality of Melendugno. SD2 has allowed Azerbaijan to increase natural-gas exports in 2020 by 16.7 percent over the previous year, reaching 7.7 bcm.

On the last day of December 2020, the first Azerbaijani gas from SD2 the reached that final destination in Italy. As Azerbaijan’s President Ilham Aliyev noted, “For the first time in history, Azerbaijani gas is already in Europe. This is our historic achievement.” The TAP project, connecting various countries, energy companies and financial institutions, became a reality thanks to the recognition of mutual interest and productive cooperation.

Azerbaijan is one of the largest natural-gas producers and exporters in the Caspian Sea region. Following the discovery of the Shah Deniz field in 1999, and the start of Shah Deniz Stage 1 (SD1) operations in 2006, the country’s gas export potential has increased. Azerbaijan started to supply gas from SD1 to its own domestic gas market as well as to Georgia and Turkey via the Baku-Tbilisi-Erzurum (BTE) gas pipeline.

On 30 June 2018, the British energy company BP and its partners announced the start-up of SD2, including its first commercial gas delivery to Turkey. The existing Shah Deniz facilities’ production capacity is currently more than 20 billion cubic metres per year (bcm/y).

For many years, Azerbaijan supplied natural gas to Georgia and Turkey via the South Caucasus Pipeline (SCP) and the Trans-Anatolian Natural Gas Pipeline (TANAP). However, the success of Azerbaijan’s energy strategy and the availability of its resources opened the window to deliver the Caspian gas directly to European energy consumers.

The TAP is the final segment of the SGC, of which the initial capacity is 10 bcm/y. The pipeline will deliver 8 bcm/y of natural gas to Italy; of,,the remaining 2 bcm/y, 1 bcm/y will go to Greece and Bulgaria each. The Italian landfall point will be an energy hub for other European countries seeking access to Caspian natural gas.  A future expansion will increase the pipeline’s throughput capacity to 20 bcm/y.

The TAP is the final segment of the SGC, of which the initial capacity is 10 bcm/y. The pipeline will deliver 8 bcm/y of natural gas to Italy; of,,the remaining 2 bcm/y, 1 bcm/y will go to Greece and Bulgaria each. The Italian landfall point will be an energy hub for other European countries seeking access to Caspian natural gas.  A future expansion will increase the pipeline’s throughput capacity to 20 bcm/y.

The initial 10 bcm/y of gas will diversify Europe’s gas sources and supply routes over the next 25 years. This is very important for Europe, as the European Green Deal aims to reduce greenhouse gas emissions, and natural gas is indicated as one of the main transition energy sources. Together with renewables, natural gas will be the main source for reducing gas emissions by replacing coal and diesel as fuels.

European energy consumers have traditionally depended on Russian gas. Geopolitical issues such as the Russian-Ukrainian crisis and Gazprom’s monopoly have made diversification questions very significant. At present, energy consumers in Southea￹￹￹st Europe meet their gas demand mainly through long-standing supplies from Gazprom. For instance, Bulgaria’s annual gas consumption of 3 bcm/y per year is almost entirely dependent on Russian gas.

Greece’s natural gas consumption is rising due to the switch away from coal-fired power generation; consequently, the 2 bcm/y of gas for Greek and Bulgarian energy consumers is important for them. Bulgaria will receive Azerbaijani gas via the Interconnector Greece-￹Bulgaria (IGB). The Shah Deniz consortium aims, further, to reach energy consumers in Serbia, Kosovo, Bosnia and Herzegovina, Montenegro and Croatia through the  Ionian Adriatic Pipeline (IAP) project.

The TAP thus supports the development of gas interconnectors in Europe, which is one of the priorities of the EU’s energy security strategy. In this regard, Southeast European countries like Greece and Bulgaria, and others, will benefit from this alternative gas source, which will also strengthen Italy’s and Greece’s position as energy hubs.

One can emphasize that TAP is a direct and cost-effective transportation route to Southeast Europe and beyond. Developments in the European natural-gas markets demonstrate that additional pipeline gas, not excluding from Central Asia, and LNG will be important gas sources for energy diversification in the foreseeable future. European governments understand that natural gas will be a transition fuel toward cleaner energy, and TAP pipeline meets all ecological standards.

So far, Azerbaijan has managed to realize its strategic objectives of its natural gas strategy successfully. The country’s potential as a gas producer and exporter will increase with the eventual development of the Umid-Babek block of offshore fields.

The opening of the TAP underscores yet again Azerbaijan support for inter￹regional projects. In the South Caucasus, the end of the 44-day war between Armenia and Azerbaijan has brought new realities and economic perspectives to the region. Azerbaijan also welcomes Central Asian countries to join the SGC network to supply gas to Europe.