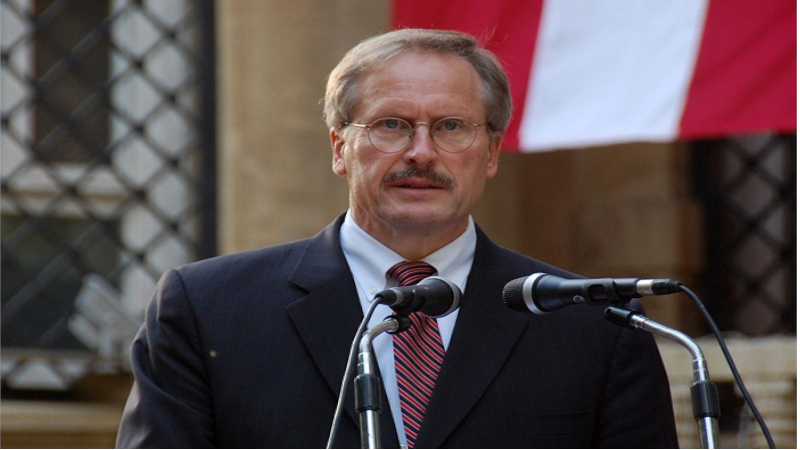 It is time for more active U.S. engagement on the Nagorno-Karabakh conflict, Robert Cekuta, former U.S. Ambassador to Azerbaijan said in an exclusive interview to News.Az.

The interview on the Nagorno-Karabakh topic was coordinated by the Nizami Ganjavi International Centers.

The former diplomat noted that there is no reason to regard ethnic conflicts as a given.

“When I was U.S. Charge d’ affaires in Albania in the late nineties, the then-Prime Minister put it well when he told me, “there is no reason why southeastern Europe cannot be like northwestern Europe.” Western Europe has a history of centuries of warfare and yet the countries came together after World War II to establish mechanisms and structures to preclude the sorts of Anglo/French/German military confrontations that had long characterized that part of the world,” he said.

While the roots of the Nagorno-Karabakh conflict can be traced back to the late 19th century, there is similarly no reason why it should be looked at as something to be accepted or considered predestined, Cekuta noted.

“Indeed, given the damage this protracted conflict does to the Transatlantic post-Cold War security architecture, the opportunities it presents to pull in outside powers, and the negative implications it has for U.S. interests, the reasons are there for Washington to take a more active role in encouraging the parties to move forward towards a peaceful resolution.”

The former ambassador said when the conflict over Nagorno-Karabakh flared again in the last years of the Soviet Union, it became an open, bloody war that resulted in about 30,000 casualties and hundreds of thousands of refugees and internally displaced before a cease-fire was agreed in 1994.

“Casualties have continued to mount since, even in years it seemed “stable,” and the two sides spend substantial percentages of their GDPs on military equipment. The fighting in April 2016 that killed dozens and wounded over 300 shows the conflict cannot be regarded as quiescent. Hundreds of thousands of individuals continue to be affected; today, for example, 1 million Azerbaijanis, in a country whose total population is an estimated 10.2 million, are internally displaced or refugees because of the continuing conflict. Publics on both sides have increasingly entrenched negative views of each other. Another factor making the status quo in Nagorno-Karabakh and the surrounding regions occupied by Armenian forces unacceptable and dangerous is its potential for pulling in outside powers. Russia is already deeply involved, not just as a Minsk Group co-chair, but in other ways, including by providing arms, selling them to Azerbaijan, and offering them on credit to Armenia,” he added.

He stressed that the U.S. has relied on the Minsk Group, established by the Organization for Security and Cooperation in Europe (OSCE) in 1994, to mediate and help find a peaceful solution to the Nagorno-Karabakh conflict. “Co-chaired by France, the Russian Federation, and the United States, the OSCE’s lack of progress and past failed efforts, such as the Key West Meeting in 2001, have meant the Minsk Group has come to have less political backing in Western Europe and the United States.”

Since taking office, the Trump Administration has stated a determination to reevaluate previous U.S. policy approaches, Cekuta added. “It has been open, for example in the National Security Strategy it published in late 2017, in discussing a change international dynamics, in particular pointing to great power competition with China and Russia as well as to the threats Iran’s policies pose to international peace and security along with the dangers of terrorism, international criminal groups, and violent extremism. Each of these factors is very much at play in the South Caucasus. Moreover, the U.S. Administration has just published its National Security Strategy for Central Asia, and geography dictates peace and prosperity in the South Caucasus are essential to the vision the Administration announced it will pursue among Afghanistan and the five Central Asian republics of the former Soviet Union.”

He noted that given these Administration announcements, now should be a time for Washington to engage more creatively to foster forward movement in Nagorno-Karabakh.

“First and foremost, to advance international peace and security, the United States should engage the parties to implement what has already been agreed by the international community. Principles for a settlement are on the table. However, the realities are that implementation will only occur via a series of step-by-step processes and actions and will require the acceptance, if not support, of both sides’ populations. Given how unbending public attitudes in the two countries have become towards the conflict, actions such as convincing the Armenian and Azerbaijani governments to take steps to prepare their publics for peace would in themselves be significant. The two countries’ leaders have already agreed in principle to this notion, and the travel of journalists from the two countries to each other’s territory is a good initial effort in this regard. Additional moves along these lines, such as promoting people-to-people exchanges, including bringing young people from Azerbaijan and Armenia together in programs in the United States, would be beneficial. So would identifying areas for actions mutually benefiting both sides, such as addressing regional environmental concerns that might bring together experts and officials from the two countries. At the same time, Washington should stop letting the outdated diplomatic dances, put in place because of Nagorno-Karabakh, hold its engagement hostage. There are different ingredients in U.S. relations with Armenia and Azerbaijan, just as there are in U.S. relations with other states that have conflicts,” the former diplomat said.

He also emphasized the importance of the fact that the U.S. should stop the practice of trying to mirror every action it takes with either Armenia or Azerbaijan by taking the same or equivalent action in the other.

“Given the decades of harsh rhetoric and the way the two publics have come to view each other — experts deeply familiar with other long-standing disputes, such as the Arab-Israeli Conflict or that between India and Pakistan note the animosity between Armenia and Azerbaijan is greater than even what is felt in those conflicts — such an approach by the United States would be significant. Moreover, it would show the United States is not going to have its policies in the region hobbled by Moscow. Acting to address the protracted conflict in Nagorno-Karabakh would promote peace and stability in the Greater Caspian Region, i.e., in Central Asia as well as in the South Caucasus. It would be in the national interest of the United States as set out in the Trump Administration’s’ own strategy statements. It would show it is no longer a given that Russia can keep manipulating ethnic concerns for its own policy ends. It is time for a new U.S. approach,” Cekuta concluded.