FM: Azerbaijan ready to provide all guarantees to both communities of NK 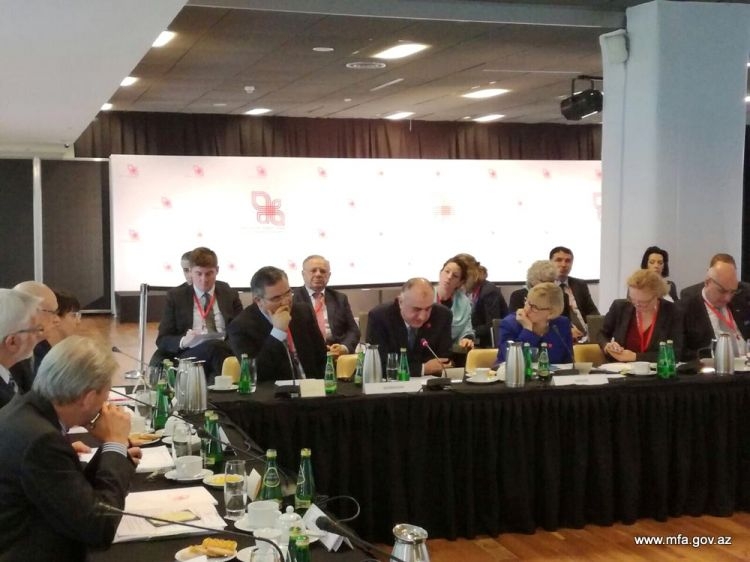 The future of the Eastern Partnership strongly depends on lasting security, peace and stability in the Region suffered from conflicts, said Azerbaijani Foreign Minister Elmar Mammadyarov.

Azerbaijan believes that timely and active role to be played by the EU is important for stability and development in our region, Mammadov said at the meeting of foreign ministers of Visegrad (V4) Group and Eastern Partnership countries, the Azerbaijani MFA told APA.

He noted that Azerbaijan is interested in a negotiated settlement of the conflict and roadmap based on principles of international law.

“Particularly, as it is enshrined in the Global Strategy for the EU’s Foreign and Security Policy-2016. However, the country keeps all rights to restore its violated territorial integrity by all possible means in its disposal if already decades-old negotiations do not yield any results,” Mammadyarov said.

The FM outlined that the Government of Azerbaijan is ready to provide all guarantees to the both (Armenian and Azerbaijani) communities of the Nagorno-Karabakh region.

“Contrary to Azerbaijan’s attempts to find a solution to the conflict, Armenia is continuously conducting a purposeful policy of changing the demographic nature of the occupied territories, as well as fabricating illegal “elections” or “referendums” in the occupied Nagorno-Karabakh. The most recent illegal “referendum” in the occupied territories proved to be yet another provocative attempt against the constitutional order of the Republic of Azerbaijan. This illegal action has been rejected by the international community,” he added.

Mammadyarov also added that the April events of 2016 and the most recent provocation taken place in the Line of Contact on February 25, 2017 proved the fragility of the situation of “no war, no peace.”