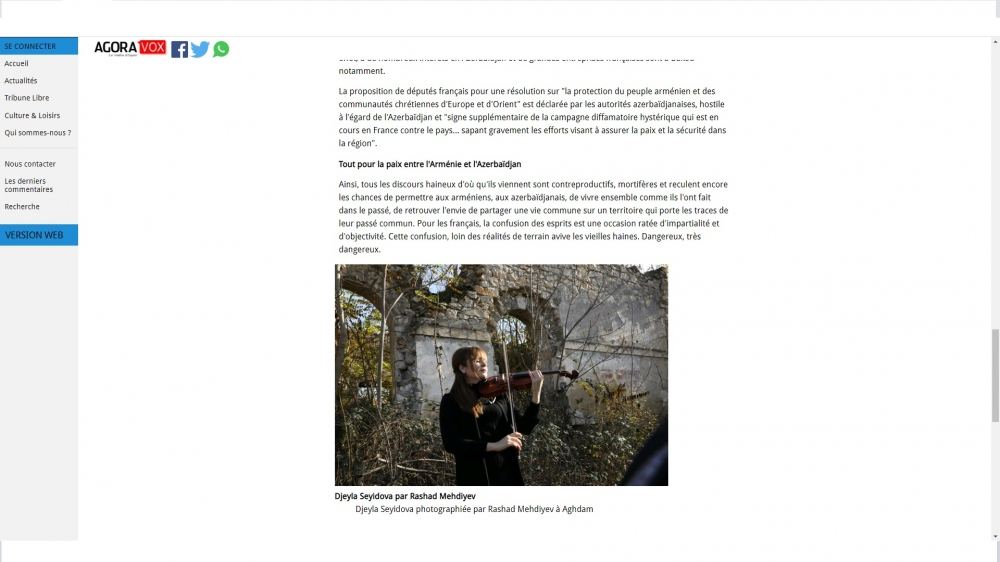 Agreement between Armenia and Azerbaijan to end the war in the Nagorno-Karabakh conflict zone was reached on Nov.10, 2020, and the ceasefire declared after the war seems to be continuous, ‘Peace for Azerbaijan and Armenia’ article issued on French media portal AgoraVox stated.

“Azerbaijan, which didn’t cross the Armenian border by a centimeter, having carried out a military operation on its territory, liberated seven districts that were under the occupation of Armenians for almost 30 years, as well as the city of Shusha, which is considered the cradle of Azerbaijani culture,” the article’s author Alen Rumestan noted. “Three of these districts - Aghdam, Kalbajar, and Lachin - were returned to Azerbaijan in accordance with the agreement.”

According to the article, UN Security Council resolutions demanded Armenia's immediate withdrawal from the occupied territories in accordance with international law, which is the guarantor of the territorial integrity of countries, inviolability of borders, and peace.

“At least 800,000 Azerbaijanis have become internally displaced persons in their country for almost 30 years, having forcibly left their lands under occupation, moved to other parts of the country and the capital Baku. Today they want to return to their native places”, pointed out in the article. “In such a situation, a real ‘incitement to war’ campaign in France could aggravate the situation. Are these warmongers hoping to blaze out the conflict again? Don’t they know that it led to numerous casualties on both sides?”

“In France, some persons even used the religious factor in this provocative campaign by expressing radical anti-Islamic views. However, what happened between Armenia and Azerbaijan has nothing to do with a religious conflict,” emphasized the article.

According to the author, some people ignorant of the conflict don’t refrain from making absurd statements.

As he noted, the common feature of these people is that they all have wrong information about the conflict, are far from reality, and, most importantly, ignore the position of one of the parties. 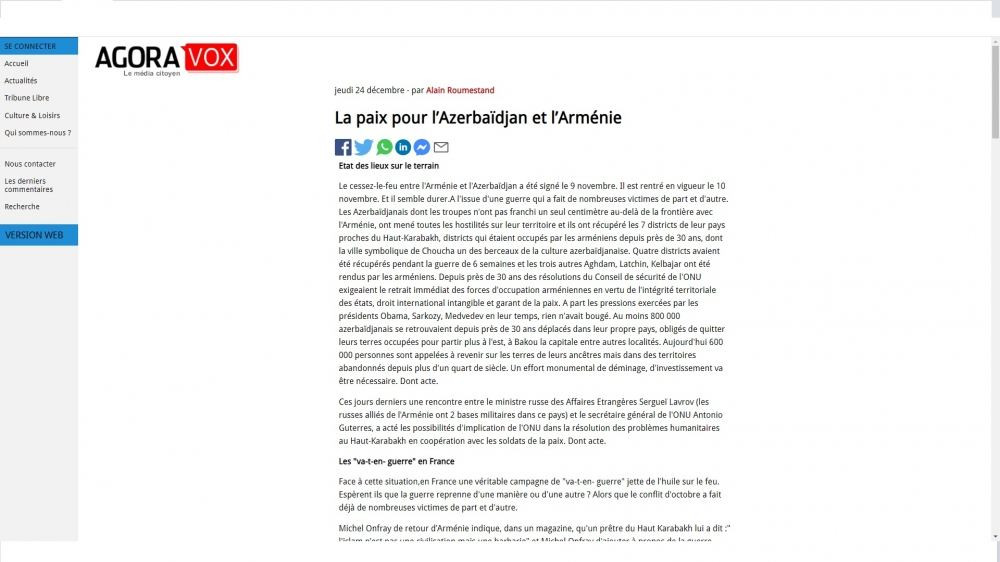 “But even more dangerous is the expression of opinions by these people in the context of hatred,” he said.

Touching upon the recent resolution of the French Senate on the recognition of the ‘Nagorno-Karabakh Republic’, Rumestan informed the reader that such a step was taken in the world for the first time, and in 30 years no state has recognized this ‘republic’.

The article stressed that Azerbaijan is a secular country in which representatives of different religions live in peace and harmony. The statement of Azerbaijan’s chief rabbi was cited, published in a Swiss newspaper, that synagogues, churches, and mosques in this country are lined up and kept in perfect condition, that people walk in the streets in any desired clothes, freely professing their religion and beliefs.

The article also reminded us that Azerbaijan is the first secular republic in the East, wherein 1918 women were first granted the right to vote, although in France this happened in 1945. In Azerbaijan, women carry out activities as entrepreneurs, engineers, politicians.

The author also emphasized the role of Azerbaijan in financing the renovation of seven churches of the X and XII centuries in the French department of Orne, the Strasbourg Cathedral, the bas-relief in the basilica of the Church of St. Peter in the Vatican, the catacombs of St. Sebastian in Rome.

“Pope John Paul II and Pope Francis reportedly visited Azerbaijan and praised religious tolerance. Tourists can visit the renovated Armenian Church in the center of Baku,” he added. “Moreover, it should be noted that thousands of Armenians live in Azerbaijan in harmony with all the citizens of the country. The World Forum on Intercultural and Interreligious Dialogue is being held in Baku, which brings together representatives of different religions and cultures from all over the world.”

The article noted that fake news about the Armenian-Azerbaijani conflict was disseminated in France. It was erroneously stated that Azerbaijan allegedly wanted to destroy the traces of Christian civilization. France lost its reputation as a fair mediator and co-chair of the Minsk Group, and the Azerbaijani public demanded the removal of France from the co-chairmanship in it. The decision of the French deputies was met with great discontent in Azerbaijan, and it was stated that such steps are contrary to peace and security in the region.

The consequences of all hatred-arousing statements, no matter where they come from, are extremely negative and prevent Armenians and Azerbaijanis from living together as in the past. Prejudice in France fuels hatred, which is very dangerous, summed up the article.