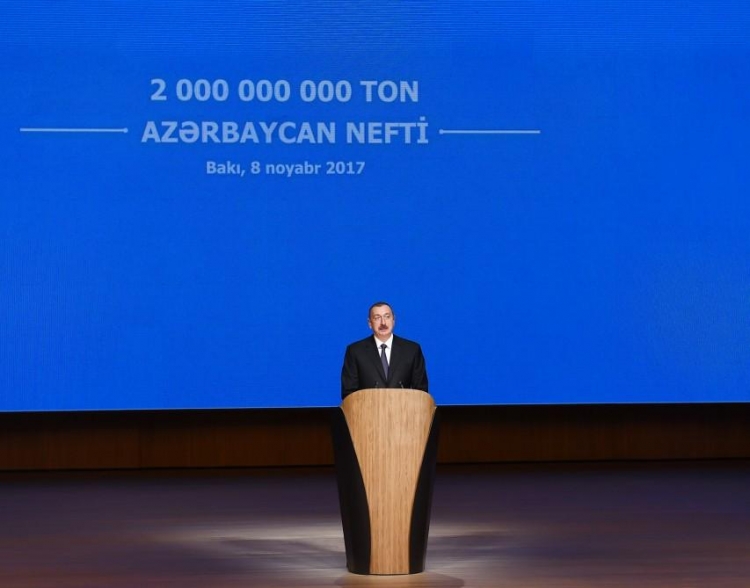 The financial situation in Azerbaijan is very stable and very positive, President Ilham Aliyev at a solemn ceremony marking the production of two billion tons of oil in Azerbaijan at the Heydar Aliyev Center on Nov. 8.

“Our financial situation is very stable and very positive. We do not have any problems. Ill-wishers are trying to discredit us with allegations that Azerbaijan’s financial situation is not good. Our financial situation can be an example for many countries. We increased our foreign currency reserves by $4.5 billion only in the first nine months of this year. It will further increase until the end of the year. Our foreign debt accounts for about 18 percent of the gross domestic product. This is a desirable, miraculous figure for many countries. Davos, a leading economic forum, appreciates our economic success. We rank 35th in the world. We have no financial problems or difficulties,” said President Aliyev.

Big funds will be allocated to the oil industry next year as well, noted the head of state.

“Of course, the State Oil Company also makes money, but the state has been supporting and should always support the company, because it is Azerbaijan’s strategic asset and strategic resource,” said Ilham Aliyev.

He underlined that today, Azerbaijan has fully ensured energy security.

“We used to import gas from abroad, but now we sell it abroad. We were buying electricity, and now we sell it. Now we sell oil, oil products. We will sell big volumes of gas and more money will be brought to our country,” said the head of state.

"We use this money very efficiently and transparently. As you know, all oil revenues are kept transparently in the State Oil Fund. This is one of the most transparent internationally audited oil funds in the world. We allocate funds to projects that are important to the country. We both raise resources and use the funds for the most important social and infrastructure projects, of course, after the approval of these expenses by the Azerbaijani parliament. The solution of refugees’ problems is among them,” he said.

Construction of about 100 settlements, schools, as well as infrastructure projects, and projects related to the development of oil industry are among them, added President Aliyev.

The president noted that construction of a huge drilling rig and Baku-Tbilisi-Kars railway were also financed by the State Oil Fund.