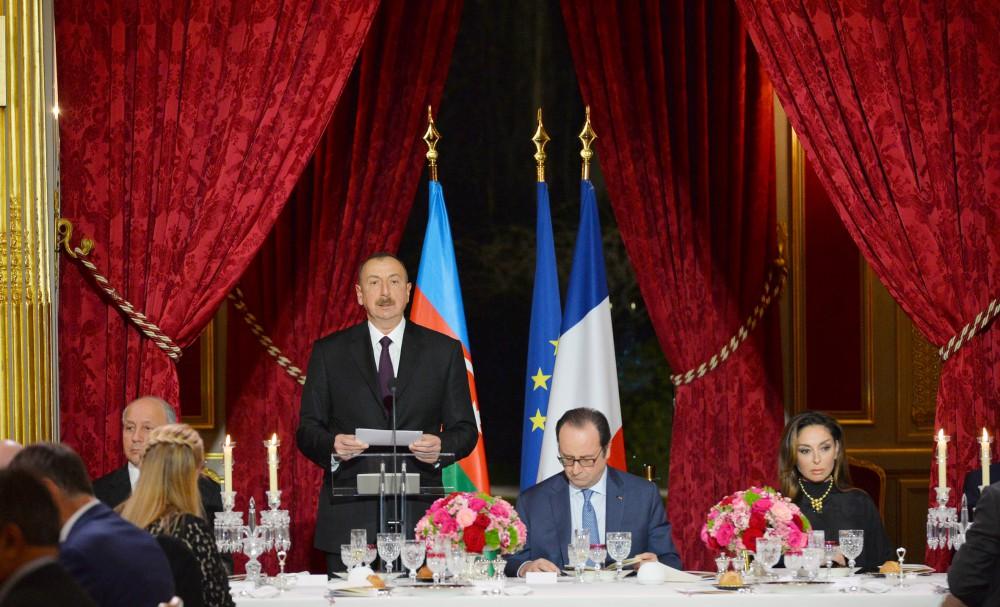 The presidents made speeches at the event.

"Dear Mr. President, Ladies and gentlemen! Mr. President, first of all, I want to express my gratitude for the invitation to pay an official visit to France, and also for the hospitality extended to me and the delegation during this visit.

I would like to note with satisfaction that the political relations between Azerbaijan and France are at a high level. Our mutual visits have become a tradition. I have repeatedly visited France as President of the Republic of Azerbaijan. You, Mr. President, have visited Baku twice. Mutual visits illustrate that French-Azerbaijani relations are at a high level. There is a very active political dialogue between us. I am very pleased that our current visit to the French Republic coincides with the 25th anniversary of the establishment of diplomatic relations.

France is a co-chair of the OSCE Minsk Group on the settlement of the most difficult problem for the region – the Armenian-Azerbaijani Nagorno-Karabakh conflict. As a result of Armenian military aggression, 20 per cent of the territory of Azerbaijan was occupied by Armenia, including Nagorno-Karabakh, which is our historical land, and seven adjacent districts. A policy of ethnic cleansing has been carried out and more than a million of our compatriots became refugees and internally displaced persons. Four resolutions of the UN Security Council have been adopted in connection with the conflict. There are relevant decisions and resolutions of the UN General Assembly, the OSCE, NATO, the European Parliament, the Parliamentary Assembly of the Council of Europe, the Non-Aligned Movement, the Organization of Islamic Cooperation and other influential international organizations. The conflict must be resolved only in accordance with the norms of international law and within the territorial integrity of Azerbaijan. The status quo is unacceptable. France, like other co-chairs, has repeatedly made statements about this. Unfortunately, Armenia ignores this and does not renounce its occupation policy. Nagorno-Karabakh is ancient and historical land of Azerbaijan. The territorial integrity of our country cannot be the subject of negotiations.

The economic ties between Azerbaijan and France are developing rapidly. To date, French companies have participated in 27 projects in Azerbaijan as contractors. These are worth about $2 billion and cover such fields as energy, aviation, space industry, transportation, water, agriculture, etc. One of the main areas of our economic relations is cooperation in the energy sector. French companies take part in projects being implemented in the oil and gas sector of Azerbaijan. the Southern Gas Corridor project, which is being successfully implemented on the initiative of Azerbaijan, is of great importance for the energy security of Europe.

We have broad cooperation in the humanitarian sphere. The teaching of French has been conducted in Azerbaijan for many years now. About 50,000 students learn French in 338 Azerbaijani schools. French is taught in seven higher education institutions of Azerbaijan. The Baku Slavic University operates the Victor Hugo French Language and Literature Center. There is a French Center at the Azerbaijan University of Languages. Three years ago, we established the Baku French Lyceum. Mr. President, we attended the opening of this Lyceum together. The Azerbaijan-French University began to operate last year. The teaching of the Azerbaijani language has been conducted in France for several years. There is successful cooperation also in the sphere of culture.

Cooperation is also developing between the regions of France and Azerbaijan. Relevant documents have been signed between 14 cities of Azerbaijan and 12 cities and one province of France.

Dear Mr. President, I would like to express my gratitude for the invitation and the hospitality once again, wish you good health, and continuous development and progress to your country and people."