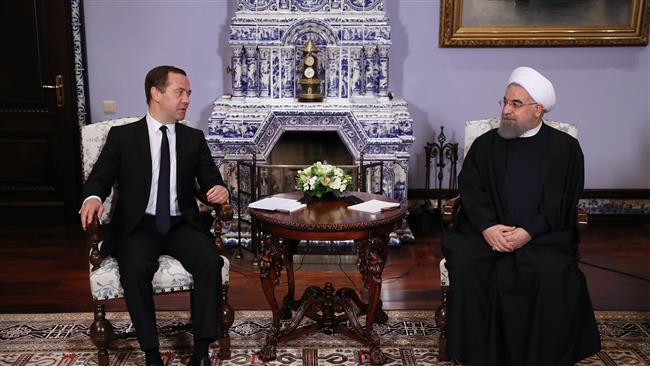 Iranian President Hassan Rouhani says relations between the Islamic Republic and Russia are “growing,” stressing that their mutual ties will play an effective r

“Undoubtedly, cooperation between the two countries will have positive effects on the regional and international stability and security,” Rouhani said in a meeting with Russian Prime Minister Dmitry Medvedev in Moscow on Monday.

He added that Iran welcomes the expansion of relations with its neighboring countries in the region, particularly Russia.

The Iranian chief executive expressed hope that his visit to Moscow would lead to new developments in Tehran-Moscow cooperation in political, economic and cultural areas and on international issues.

The Russian premier, for his part, said his country was resolved to bolster relations with Iran in all sectors.

He pointed to the favorable relations between Tehran and Moscow and expressed confidence that President Rouhani’s trip would help both sides further deepen their ties.

Heading a high-ranking politico-economic delegation, the Iranian president arrived in Moscow Monday evening for a two-day official visit at the invitation of his Russian counterpart, Vladimir Putin.

The Russian president is scheduled to officially welcome his Iranian counterpart at the Kremlin on Tuesday. Rouhani and Putin will then hold talks on regional and international issues and matters of mutual interest.

The two presidents are also expected to issue a statement following their meeting.

Speaking to reporters in Tehran on Monday before setting off for Moscow, Rouhani said the two sides were closely cooperating on regional issues, including fighting against terrorism and promoting stability.

“The two countries are also opposed to any shift in geographical borders in the region,” he said, adding that Iran and Russia have the highest level of cooperation on the crisis in Syria, the campaign against terrorism and the establishment of stability in the Middle East.